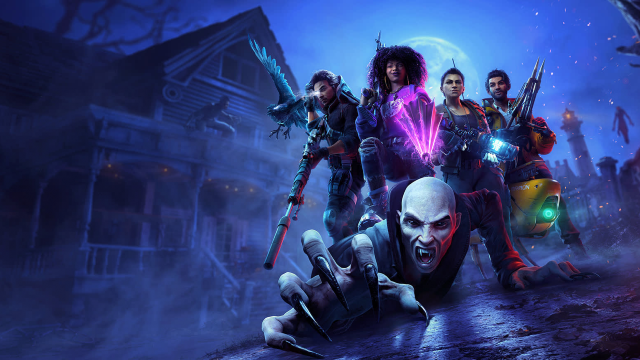 The latest game from Arkane Studios, titled Redfall, will release exclusively on Xbox consoles and PC. The co-op game takes place in a post-apocalyptic future, with players fighting off a vampire invasion.

The game was announced for the first time as the final announcement of Xbox and Bethesda’s E3 Showcase. A cinematic trailer introduced the world to Redfall, set in the Massachusetts town of the same name. As per the trailer’s description, a vampire infestation is holding the town hostage, blocking out the sun and preventing aid from reaching the island. It’s up to our four heroes to liberate their town, and eliminate the grave vampire threat.

The trailer opens by slowly introducing each of the four as-of-yet-unnamed characters, all with unique abilities. One can use telekinesis to hold items in mid-air, one is proficient with robotics, one is a scientist, and one is a sharpshooter specialist. The trailer then flashes back to scenes of the four working together in combat, each with a different weapon. Rather than just vampires, they also seem to fight balaclava-wearing bandits, attempting to take them out.

Then, the trailer shows off the vampires, as they chew on necks to kill their prey – seemingly arising from a cult uprising. They’re incredibly mobile, running around on four legs and catapulting across the town. Of course, our heroes take them out with a sharp stake to the heart. The variety of enemy powers is interesting, as one vampire has flaming hair and can seemingly overpower our heroes.

Aside from that, we really don’t know much about Redfall. It’s labeled as an ‘open-world co-op FPS,’ developed by Arkane Austin. As an Xbox and PC exclusive, it’s a sharp difference from its upcoming game, Deathloop. That game debuted before Microsoft bought Bethesda, Deathloop is a PlayStation 5 and PC exclusive. Bethesda owns Arkane, and Redfall might be the first of many Xbox exclusive releases from the studio.