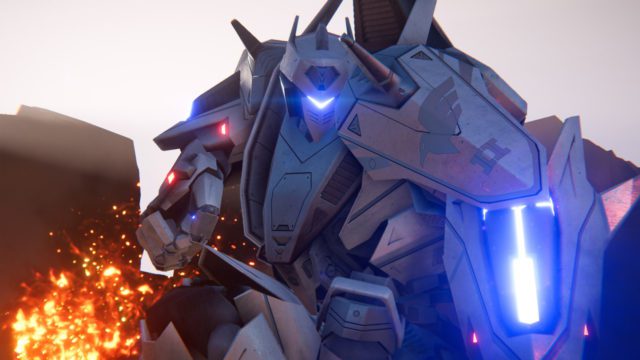 At some point in history, someone decided that it would be a cool idea to see machines fight each other. Today, the spectacle of watching giant robots fight monsters or even other robots is one of the most popular concepts. There are endless numbers of movies, TV shows, and video games that revolve around these mechanical juggernauts duking it out. Drekkar Dev has aimed to contribute to this pool of media with its title Blackwind. This third-person game ticks off a lot of appealing boxes before you even start it up by tasking you with donning an experimental mech suit and taking down an alien menace. 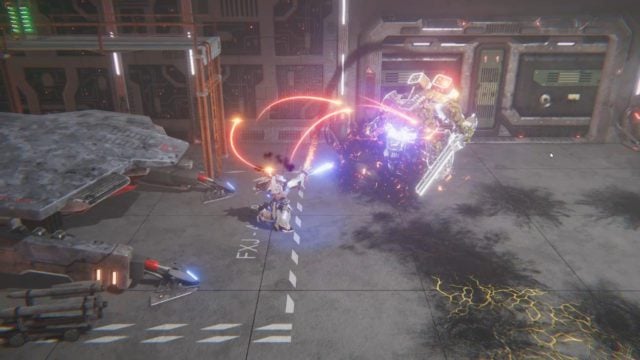 When it comes to experiences that revolve around spectacle, the story is somewhat less important than the overall enjoyment. You have series like Gundam and films like Pacific Rim that try to add more depth and emotion to the characters against the backdrop of mech battles, but Blackwind goes a simpler route. You are James Hawkins, son of Professor Hawkins, who works to build and design military mechs. Preparing to unveil his latest and most advanced design, the Professor’s ship is attacked, so he seals his son inside the mech to protect him and jettisons him from the ship. Now lost on an alien planet with an advanced mech and accompanying AI, James must find his father and deal with a growing alien threat. There’s more than enough reason here to go wild and unleash robot fury. 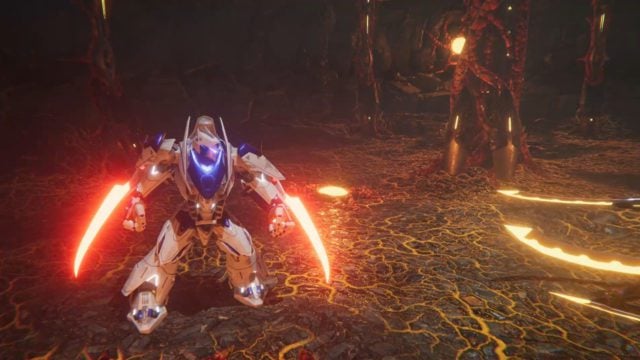 As many stories involving robots and AI go, machines are typically designed to calculate the choices that have the highest probability of success. Blackwind has made some choice calculations in terms of gameplay. The first one is the pace of it, considering the material. A lot of robot games are slow-paced to compensate for their huge size, but this one isn’t. By making the mech a large humanoid, you’re able to move much faster and get into the action instantly. It makes you feel agile while still being powerful.

This sensation carries over into the combat. Frequently while exploring the game, you’ll be ambushed by large groups of enemies of various types. They’ll attempt to swarm you and overwhelm you with attacks, so you have no time to plan the perfect strategy. You have a robot and a bunch of buttons that each unleash different kinds of punishment. It’s a hack-and-slash to the core that encourages you to use all your attacks as much as you want, which feels very satisfying. This allows it to draw you into the action seamlessly. 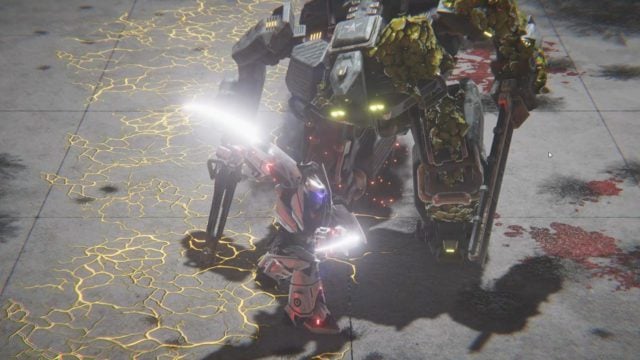 In many technology stories, humans design machines to be perfect, but that’s never how it works out. Often, grave errors can occur. They often take the form of malfunctions, and Blackwind has suffered a few of those. This is clear in the imbalance of attacks. Though you have a varied arsenal, the AoE attack and blaster are a bit too powerful. You can upgrade the blaster to have a spread shot, then boost its damage so you quickly take out enemies that aren’t even on-screen. You can use the AoE attack over and over again to deal heavy damage as well as knock groups of enemies to the ground.

Then there are the combat animations. Like many close-combat games, this one uses a system where once enemies take sufficient damage, you can perform a finishing move on them. You can defeat almost every enemy this way, but it gets bland quickly. Each enemy type only has one associated finishing animation, so when you’re fighting more than one, you’ll likely see the same animation play out several times over the course of a few seconds. It would’ve been nice if finishers were based on which weapons you used or how close enemies are to each other, but that’s not the case.

Sadly, there are also a fair number of technical issues. These include things such as sticking to the top of objects, transitions not loading properly, tight camera angles, and random elevations. The latter is particularly annoying during combat as it can cause you to miss enemies standing right in front of you.

Blackwind is a third-person hack-and-slash game about a teenager piloting an experimental mech suit to search for his dad and fight aliens. It’s fast, visceral, and mostly satisfying to play. Unfortunately, it also suffers from weapon imbalance, repetitive combat animations, and a few technical problems. All that said, it’s a game that kicks off quickly, so you can start kicking alien butt without delay.

This review is based on a PC download code provided by the developer. Blackwind is available now on PS4, PS5, Xbox One, Series X|S, Nintendo Switch, and PC via Steam, GOG, and Mac App Store.