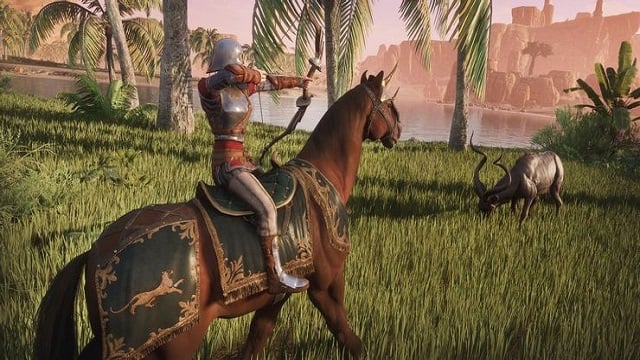 Based on the works of author Robert E. Howard, Conan Exiles has provided players a way to survive in the world of the Hyborian Age since it’s release in 2018. But for fans of the series who’ve just picked the game up, or those simply looking to get into a new survival game, crafting certain items can be challenging. In this guide, we’re going to go over how to create Explosive Arrows and how to use them effectively.

How to Make Explosive Arrows in Conan Exiles

In order to create Explosive Arrows in Conan Exiles, you first need to unlock the Specialist Ammunition III feat. After that, Explosive Arrows can be crafted at the Carpenters Bench with the following recipe:

This recipe will give the player ten Explosive Arrows. But before you can worry about gathering the resources you’ll need to for the arrows, you’ll first need the necessary feats required to make them in the first place. In order to make the recipe available, you’ll need the Specialist Ammunition III feat. This unlocks at level 49, and costs five knowledge points.

Furthermore, there are three other feats you’ll need as prerequisites. These are the Archer, Specialist Ammunition II and Steel Tools feats. Naturally, these each have their own prerequisites as well, excluding the Archer feat.

In order to gather the resources you’ll need, there are a few more feats you need to have as well. Ironhead Arrows will need the feat of the same name, alongside the Iron Tools and Carpenter feats. To make a set of ten Ironhead arrows, you will need ten branches, two iron bars, and one feather.

Next up is Dragonpowder. To make this, you’ll first need the Firebowl Cauldron feat, which requires the Iron Tools feat to learn. Next you’ll want to create the cauldron itself, which is where you make the powder. This means you need to invest 50 iron bars and 20 pieces of twine.

As for the powder’s ingredients, you need the following: Two Demon Blood, ten Brimstone, 50 Crystals and 100 Steelfire. Combine these in the cauldron and wait one minute, and you’ve got yourself a whopping one thing of Dragonpowder.

Generally, most of the ingredients in this list aren’t going to be too difficult to find. Branches and twine can easily be found and crafted, respectively, while iron can be farmed after you find a good deposit. Feathers can be gathered from birds you’ve hunted, or by feeding them and picking through the droppings.

The best way for you to get tar is to collect it from your tannery. This will mean a lot of hunting, but the process is less paiful if you have a Thrall helping you out. Alternatively, you can either use the alchemy table to crate tar from raw ash mixed with oil or resin, or use coal at a fluid press.

Of all the ingredients, Dragonpowder’s probably going to be the hardest one you have to deal with, due to how resource-intensive it is. First off there’s the Demon’s Blood, which, as the name implies, means you need to kill and harvest one of the demonic entities in the exiled lands. A good place to farm this early is in the Shaleback Hollow, where you can find seven undead kappas to harvest from.

Additionally, you can harvest the material from the Rocknose and Serpentman skeleton corpses.

Crystal is also a mineable resource, though you only find it in caves. If you are able to tame a Rocknose, you can farm crystals from it by feeding it a stone. Keep in mind though this takes 20 minutes and only has a five percent chance of bearing a crystal, so it’s not t he most reliable method available.

Finally we have the Steelfire. This is actually a fairly simple recipe, needing two tar and one Brimstone to create in a Firebowl cauldron. This will take about 20 seconds and give you one bowl of the stuff.

So, with all that, the total amount of resources it will take you to create the explosive arrows is:

With all that said and done, you’ll have yourself a set of ten explosive arrows to play with until you can build some more. This may seem like a daunting list, but by the time this recipe becomes available to you this amount of resources won’t seem nearly as scary.

While these arrows aren’t necessarily the most cost-effective in the game, they will give you more power than any other. Additionally, these arrows can ignite the gas an oil fields created by other weapons, adding to their potential damage.

The primary use for explosive arrows is for raiding in PvP. While not as effective overall as the explosive jars, they can supplement the strength of the former in certain situations. Some players have even found a niche for them in taking out bases designed to prevent climbing.

And there you have it, how to create explosive arrows and use them. Hopefully this can act as a bit of a roadmap for players going into the late game for the first time.

Looking for more on Conan Exiles?