Cyberpunk 2077 Killing in the Name | Scan the Area for Clues 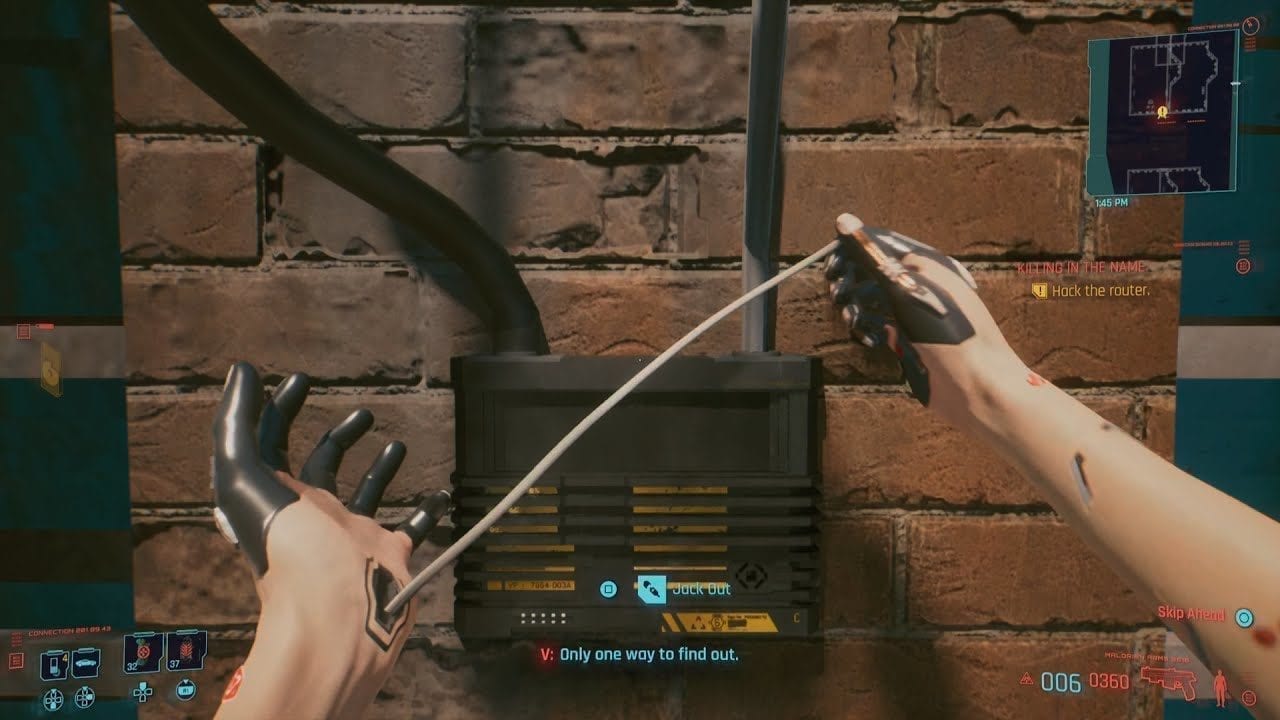 CD Projekt Red injected Cyberpunk 2077 with a ton of side content to experience. After completing the main quest Transmission, you will get an optional mission called Killing in the Name, and no, we are not talking about Rage Against the Machine. In our guide, we will walk through how to complete this mission with ease and the fatal glitch which has plagued a handful of users.

There are six main steps to complete the Killing in the Name quest in Cyberpunk 2077. Additionally, in the scan the area for clues step, there is a major bug that is keeping some players from progressing. Below are all the steps required to complete the quest.

Investigate the Site from the Bartmoss Collective Message

The first step in Killing in the Name requires you to read a message on the Internet (not Google, the game’s Net) and go to Bartmoss Collective’s website. You’ll need to look at the headline which reads, “Reward for any info on Swedenborg!” After that, you will be prompted to call Bes Isis, also known as Nancy, about Swedenborg.

To move forward, you have some quests to complete to unlock Nancy:

After wrapping up Second Conflict, you can give her a call to talk about Swedenborg and continue the Killing in the Name quest.

Scan the Area for Clues

The meat of Killing in the Name requires you to head to an area that Nancy will mark on your map, which will require you to scan the area for clues regarding the mysterious Swedenborg.

The area in question is a gap between two buildings on the south end of Santo Domingo. You will have four fire-escapes against the buildings, but only one will be down for you to walk up. Go up the stairs until you find a router that you can plug yourself into and hack away.

Some players have reported a bug for this part of the quest where they cannot scan or hack the router. A solution we have found is swapping out your processor at a Ripperdoc. Early on, one of the first implants you get is a new eye that will scan characters and items. If you are using an upgrade that was not given to you by Vik, then swap it back and see if that works out for you.

Go to the Signal’s Source and Scan for Clues

After hacking, you will get another piece of the puzzle. Talk to Johnny about the information, then head to the Badlands to track the signal’s source.

Now that you are at the new location with a giant solar panel, you need to scan the area for clues again, a trend you will see in the Killing in the Name mission. Be aware that there are enemies, so either fight or sneak around them, that’s up to you. Regardless, look for their camp and make your way over to the Nomads.

Once you are at the camp, go behind the trailer and you will see a ladder. Climb up and hack the router as you did at the previous location. You will be given another message and a prompt to talk to Johnny.

Go to the Next Signal’s Source and Scan for Clues

Follow your GPS to go deeper into the Badlands. At the facility, you will go up a series of ladders on a nearby structure. Once on top, turn around and walk against the wall on your left-hand side until you find the next router. At this point, we all know what to do. Plugin, hack, and talk to Johnny about your new findings.

Go to the Final Signal’s Source and Scan for Clues

We are back in Night City for the final router in the Killing in the Name quest. You will be instructed to go to the amusement park in Pacifica.

You will find some enemies hanging around dancing — ignore them and go straight past them. You will come across a fortune bot, and it will speak to you. Listen, talk to Johnny, and hack it.

Read the message and chat with your rockstar imaginary friend. You will have an option to turn off the machine or not. Johnny wants you to leave it alone, so that will be up to you.

Call Nancy to complete Killing in the Name.

For more help surviving Night City, be sure to check out the links below: