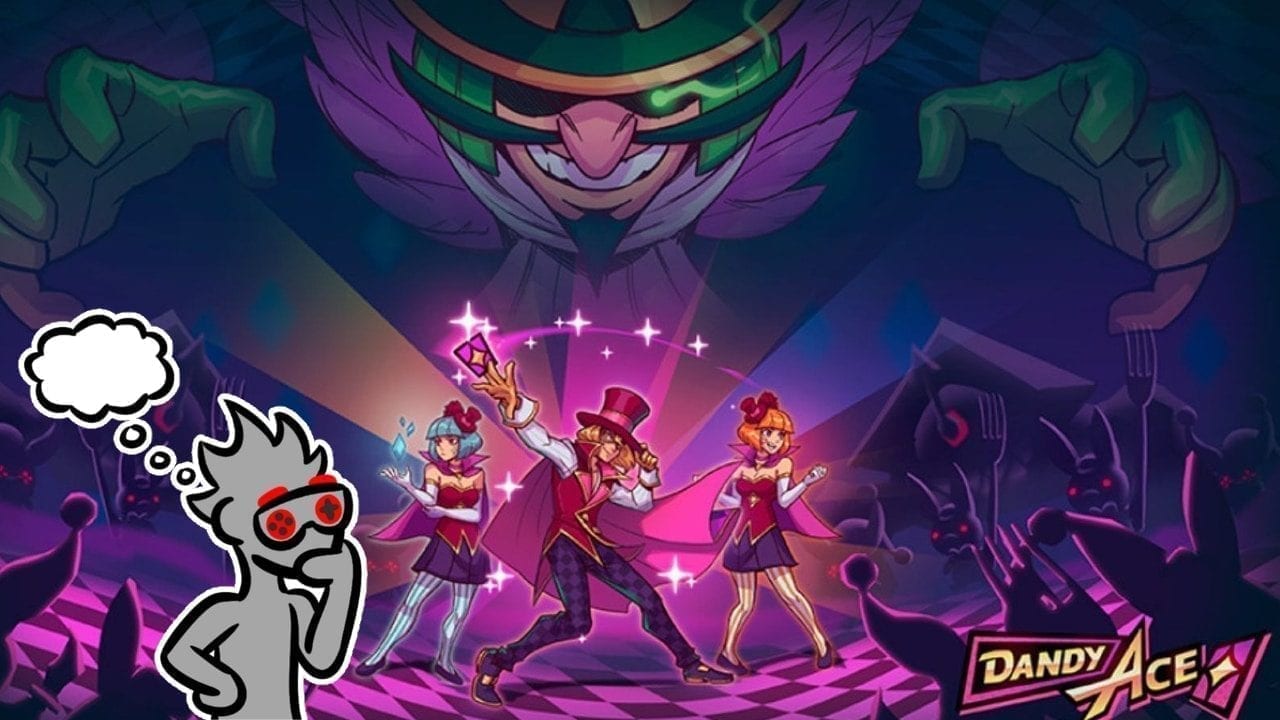 Magicians are something that many folks are split on: Either they like them or they don’t. It’s probably because we have a tendency to associate them with over-the-top and sometimes downright annoying performers. Still, they are performers, and their job is first and foremost to entertain. Their acts can range from simple and cheesy to making us question reality. Therefore, it would be ironic to place a magician in a reality-bending situation where there are no laws. This is what the developers at Mad Mimic have done with their upcoming game Dandy Ace. A magician trapped in an ever-changing illusion must use every trick up his sleeve to escape. After playing the demo, there’s more to this game than meets the eye.

The concept of magic is so fluid and diverse that you can work it into almost any context. Most of the time we don’t even question it, we just accept that there’s magic in said world and proceed with the story. In Dandy Ace, magic is a thing, and it starts with a rivalry. The story opens with Lele the Green-Eyed Magician who is delusional over his own popularity (he sucks). He becomes overly jealous when the newer, more appealing magician Dandy Ace arrives and starts stealing all the attention. Not one for healthy competition, Lele sells his soul to a cursed mirror in order to trap Dandy Ace inside. Now in a topsy turvy mirror-world, Dandy Ace has to escape the labyrinth of the mirror by fighting his way out. A jealous competitor is playing dirty, so we’ll play right back.

A Hand of Aces 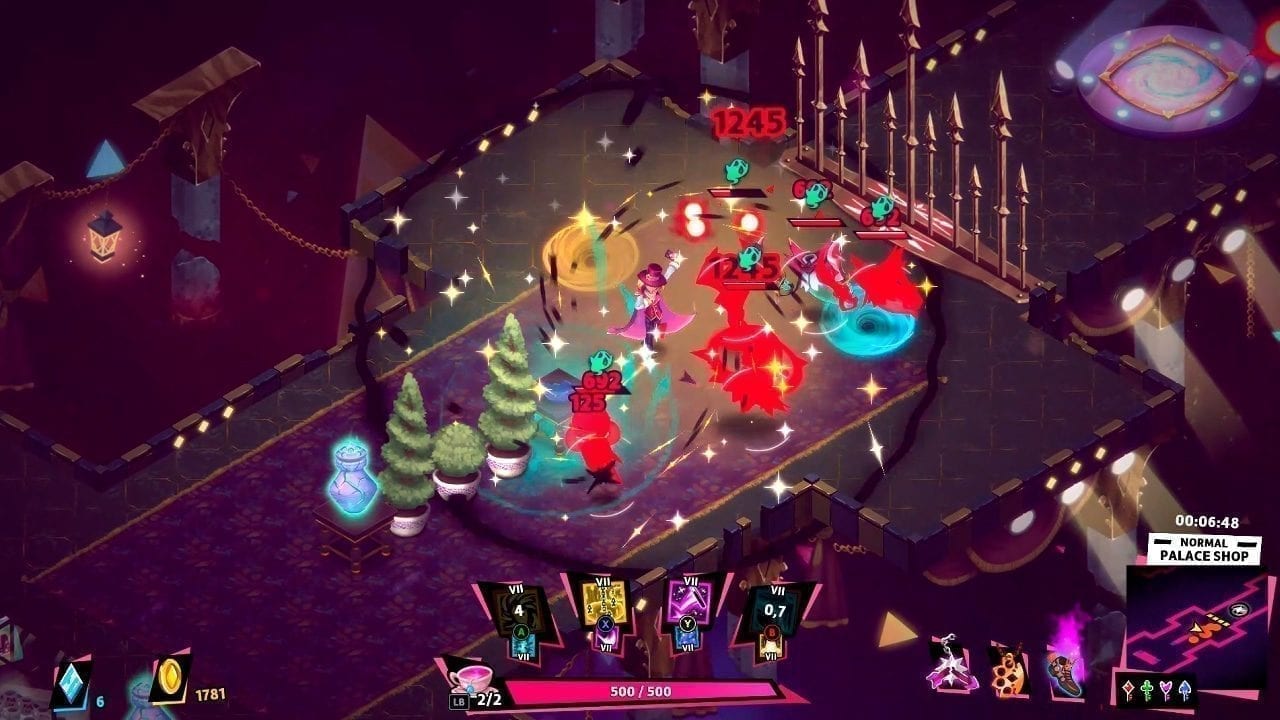 The most accepted card hierarchy is that the ace sits at the top. While card hands revolve around matches and combinations, those with aces usually take priority. Dandy Ace has a few aces showing and perhaps even more hidden away. The first ace is the game’s overall flair. Say what you want about magicians, but they know how to put on show, and Dandy Ace certainly does too. The whole game is vibrant, with loads of color and sparkles that add to the whole illusionary theme of the world. Everything feels magical and mystical, from the enemies to the attacks and abilities.

There’s also the arsenal to talk about. Another thing that magicians are known for is having a wide variety and tricks and tools, and Dandy Ace has plenty up his sleeve. While many roguelike games typically have you swap between weapons or collecting power-ups, in this one you just collect powers. Having a similar layout to the Hero abilities of Warcraft III, Dandy Ace has four slots to fill. Taking the form of cards, powers are found by exploring the maze, defeating enemies and finding shops. The abilities are pretty varied but tend to fall in one of three categories: Attacks, Traps and Debuffs. With four slots free and secondary storage, there’s a lot of freedom to play around.

Lastly there’s the overall flow of the game. Again, typical roguelikes break the world up into separate rooms or floors to pass through one at a time. However, as magicians need to smoothly transition between tricks, the world of the cursed mirror moves smoothly between encounters. To put it bluntly, Dandy Ace runs through the labyrinth freely only stopping to fight enemies after which he can just continue along path. His journey both figuratively and literally builds the world, sort of like in Bastion. Thankfully, there’s a teleportation system that allows for getting around the ever-expanding maze more quickly. 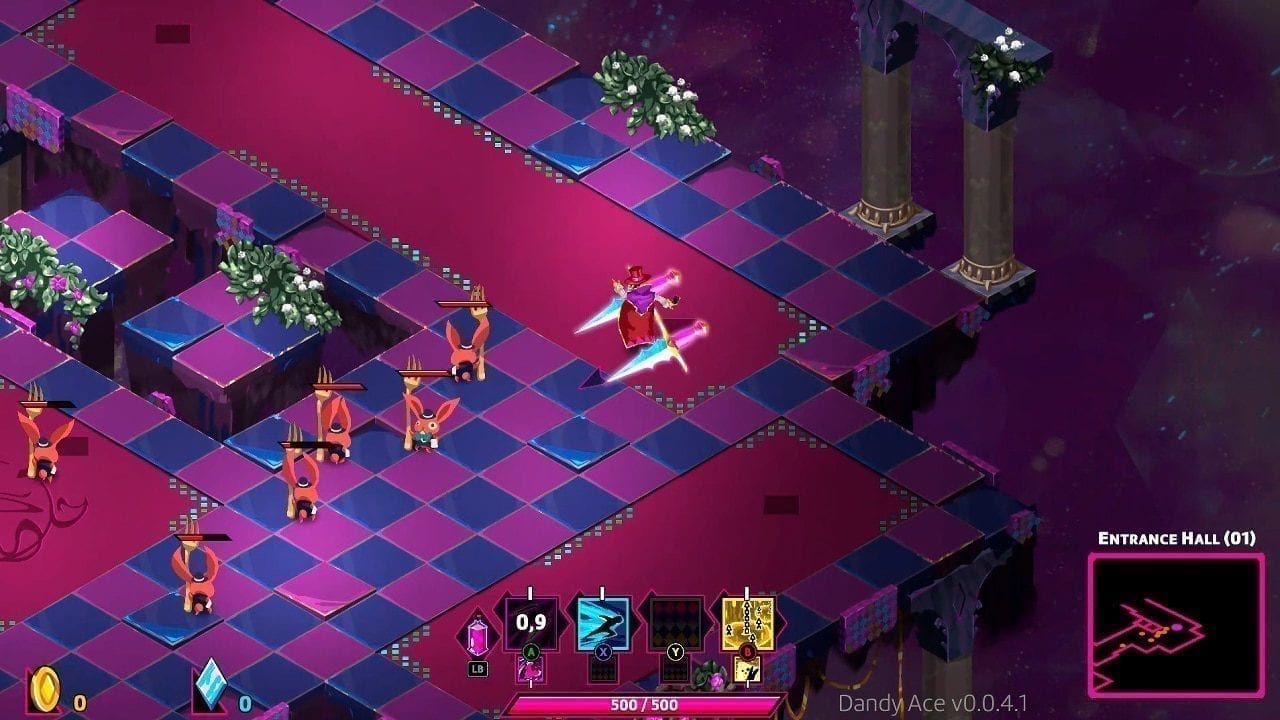 You can rehearse a show every day for a year down to every single step and then all hell breaks loose on opening night. Whether it’s unnoticeable faulty gear or simply bad luck, sometimes things fail you, and Dandy Ace is no exception to fate. One such failure takes the form of hit detection. Anyone who plays roguelikes knows that you have to stay on guard and dodge almost constantly. While Dandy Ace definitely has a selection of dodge abilities, the cooldown hampers it considering how fast enemies move. Close combat is almost impossible since enemies always seem to attack faster than you think. It also doesn’t help that Dandy Ace himself has a much larger hitbox than you may expect.

There’s also the presentation of the world. It is quite large and seamless, but sadly there isn’t much to see. For the most part, the demo shows an extending pathway of shiny tiles that change between light and dark. There are also sometimes different shades and sparkles, but they’re still just tiles. After wandering through for a while, the only real asset to these tiled floors is the enemies that appear every few steps. There don’t seem to be any traps or other objects to encounter. There are special areas such as shops occasionally, but the pathways are mostly empty like what lies behind the typical illusion.

Lastly, there’s the loot and collectibles. The demo offers plenty of enemies and space to explore, but there’s very little to find. Every so often, after slaughtering a decent number of hordes, enemies may drop health items or other abilities, but that’s pretty much it. There aren’t any treasure chests or secret rooms to find, which limits exploration to just pathfinding. There are some areas that are blocked by locked gates that need keys, but they’re infrequent, and the keys aren’t easy to find. It’s odd that this magical world leaves more magic to be desired. 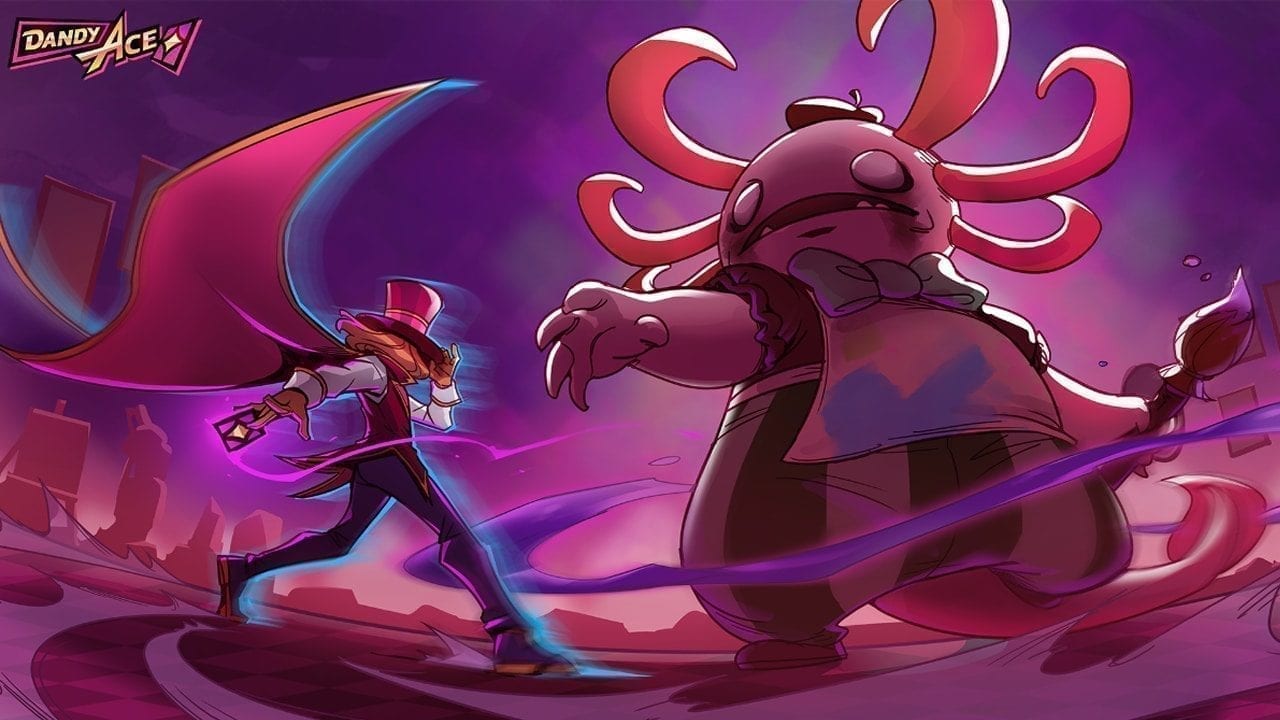 A magician is the star in the upcoming show that is Mad Mimic’s Dandy Ace. It’s a roguelike adventure taking place in cursed mirror that offers a whole bag of tricks to show off. An evil magician has conjured a lot of colorful enemies to fight in an expanding maze that could use a bit more content and combat sharpening. There are some show-stoppers here, but there’s also room to add more in future updates following the release. Dandy Ace will be release on Steam in a couple of weeks with potential for console ports. Like any good magician, Dandy Ace has good misdirection that has caught our attention.