Elden Ring players brave enough to walk a few meters away from the starting area will get attacked by a humongous dragon. Slay it, and you’ll earn a Dragon Heart. Then, if you want to get really crazy, take that heart to the Church of Dragon Communion to learn all-new Incantations. Hold on, though; where is this sacred altar to dragonkin? Read on to find out.

Where to Find the Church of Dragon Communion 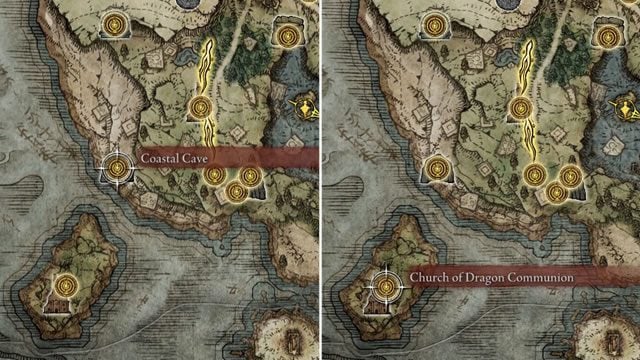 The Church of Dragon Communion is located on a small island southwest of Limgrave. To reach it, you’ll need to take the tunnels through the Coastal Cave. To get to the Coastal Cave, turn west from Elden Ring‘s starting area, then follow the cliffs down to the beach.

Though it’s not stated, the beach to the west of the Church of Elleh is sort of a low-level starting area. There’s an invisible Ash zooming around the sand, one of the first you’re likely to find. And, toward the southern end of the cliff, you’ll find the entrance to the Coastal Cave.

The Coastal Cave is one of many dungeon-like areas in Elden Ring. Unless you’re new to Soulslike games, you shouldn’t have any trouble clearing it out. You’ll want to bring a Torch or a Lantern, if you have one. Simply follow the natural path and you’ll eventually end up in an open clearing.

From there, head southwest. You’ll soon see a crumbling structure rising up in front you. This is the Church of Dragon Communion. Be sure to interact with the Lost Grace so that you can return here whenever needed. Grace points are a huge help in uncovering the entire Elden Ring map.

Inside the church is an altar that allows you to to unlock new Incantations. However, you’ll need to first get a Dragon Heart before you can learn them. Don’t worry, there are plenty to find around; one dragon guards Agheel Lake. Be warned that most the dragon-related Incantations also have high Intelligence and Faith requirements, too. Unless you’re focusing on Magic, it might be a while before you can make use of these Incantations.