Elden Ring Rock Sling Sorcery | How to Get 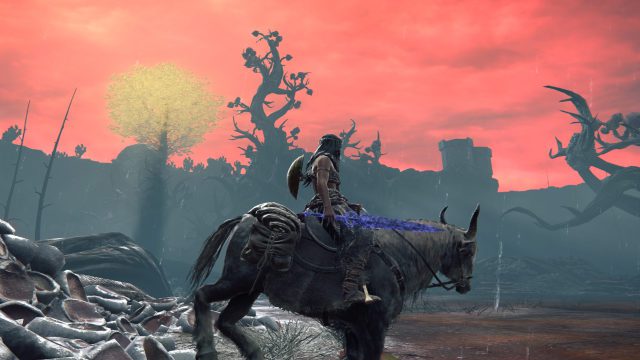 The Rock Sling gravity sorcery is among one of the most useful spells to cast in Elden Ring. What this spell does is that it essentially conjures three rocks from the ground that act as projectiles. These boulders can easily deal some decent damage, and it works well with other gravity-based sorceries. To get the powerful Rock Sling spell, you’ll have to venture into the scarlet rot-infested lands of Caelid.

How to Get Rock Sling in Elden Ring 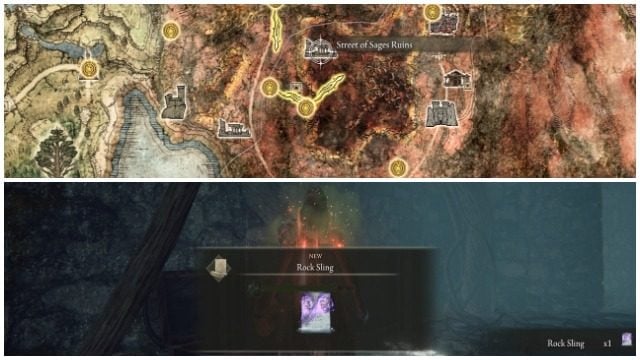 The Rock Sling Sorcery can be looted from a treasure chest within the Street of Sages Ruins in Caelid. It’ll be inside an underground cellar past all of the Poison Flowers and Servants of Rot. Although the Rock Sling will be the only item inside that tunnel, there are a couple more items nearby that you might want to scoop up. The Rock Sling only requires an 18 in Intelligence and only costs 18 FP.

Firstly, there are two ways that you can arrive at the Street of Sages Ruins. The obvious route is to explore more of Caelid by venturing into the swampy areas. Most notably the Swamp of Aeonia area contains three Sites of Grace: Aeonia Swamp Shore, Inner Aeonia, and Heart of Aeonia. Any of the three sites will give you access to the Street of Sages Ruins. Of course, it is wise to summon Torrent and traverse while on horseback. The Swamp is home to scarlet rot, and it can be quite the irritating status effect if you’re looking for something specific.

Alternatively, if you’re still in Limgrave, visit the Dragon-Burnt Ruins within Agheel Lake. Undead enemies and bloodthirsty hounds will be among the ruins, but all you need to do here is head straight underground. There will be rats lurking in the darkness, so beware of your stepping. But ahead of you will be a deceitful treasure chest. You will then be ensnared in a transporter trap, teleporting you to the heart of the Sellia Crystal Tunnel. Upon spawning, descend southward until you until the grace point. Rest up if need be, then make your exit by heading left out of the crystal tunnel and into Caelid. Once you’re outside, you can continue your journey southwest along the Swamp of Aeonia. You’ll eventually come across the Street of Sages Ruins.

Beware of where you go and how you get there, though. Invader Millicent roams the red land, so there’s a slight chance that you can run into her. She’s mostly walking among the southeast portion of the Swamp, but who knows if she might spring a surprise visit.

How to Get Meteorite Staff and Perfumer Traveler’s Set 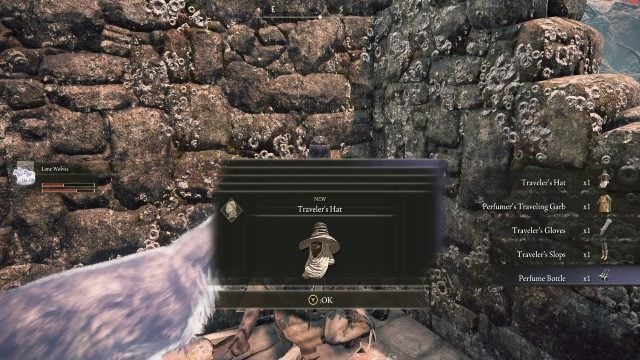 Ultimately, you don’t need to engage in battle if you’re looking to simply loot the place, but you can summon Spirits to keep the enemies distracted. The reason being is that there is still plenty of items to find in the area.

Once you exit the underground tunnel, make a right going south and enter the larger ruined structure. Before you, there will be a few Poison Flowers to dispose of. Right behind them will be a dead body hanging over the window. Loot him, and you’ll receive the Meteorite Staff, which we’ve actually covered before. This fantastic Glintstone Staff scales highly with an S Intelligence and generates passive boosts for gravity sorcerers. Additionally, you only need Strength 6 and Intelligence 18 in order to wield it. Not only can the staff boost the Rock Sling, but it can also buff up the Collapsing Stars, Gravity Well, Meteorite, and Meteorite of Astel Sorceries.

Looking for more spells in Elden Ring? Check out our guides on how to get the Comet Azur and the Carian Retaliation!