Goat Simulator 3 Whistleblowers | Where to Find 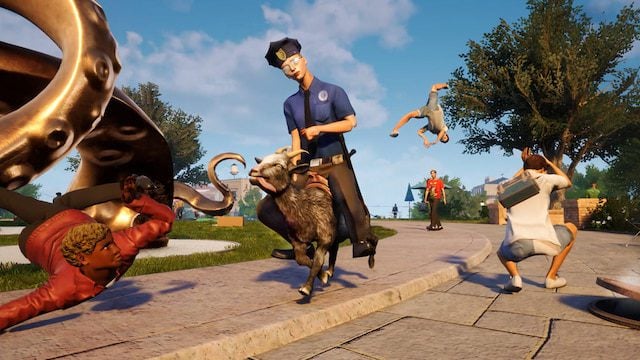 The life of a goat in Goat Simulator 3 is not easy. There’s a lot to check off your daily checklist, from cleaning up the streets to wreaking havoc in them. While we spend much of our time getting into mischief, there are times when we need to maintain order. And if there’s one thing goats despise, it’s whistleblowers. These aren’t the secret-blowing kind either, but rather people literally blowing whistles. That doesn’t sit well for us goats, and it’s why we’ll help the cops lock them all away. So, if you need help locating these outlaws for the Whistleblowers’ quest, keep reading to find their whereabouts.

Where to Find Whistleblowers in Goat Simulator 3 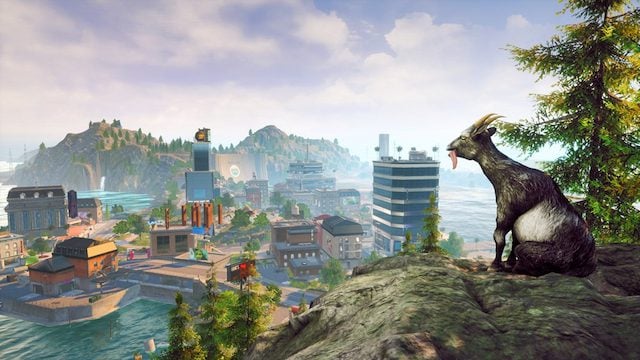 In Goat Simulator 3, there are three perpetrators you need to find for the Whistleblowers quest: Goldilocks, Tinker Bell, and the Big Bad Wolf. The first and easiest whistleblower to find is Goldilocks. Facing the street from the police station, head to your right until you see the two ATMs on the corner. Just to the right of those is Goldilocks, who will be standing in a red suit, whistling at the people who pass by. All you have to do is lick her and drag her into one of the empty cells in the Police Station.

Next on the chopping block is Tinkerbell. To find her you’ll need to head to the Food Court downtown. Keep your eye out for a building with several signs that say “Visit Libertarian Island”. On one side of this building, you can find Tinkerbell in her red suit whistling a people passing by. Again, lick her and bring her back to the Police Station. The last and hardest of the whistleblowers to find is the Big Bad Wolf.

The Big Bad Wolf is located on top of a building under construction called the “Tell Us Plaza”. This building is directly east of Coscon and south of Port of San Angora. If you were to draw two straight lines from each location, inwards towards the city, they will intersect on the building. Consequently, it’s also the largest building in this area of the map. On the streets below the building will be a ladder that leads to scaffoldings with a dumpster you can jump on to get to the top of the building. You’ll find the Big Bad Wolf up here leaning against a water tower. From here, you know the drill.

Once you’ve returned all the whistleblowers to the Police Station, you’ll complete the quest and unlock the “Police Cap”.

If this guide helped, be sure to check out our guide on where to Find Bigfoot in Goat Simulator 3.