Hades Ambiguity Bonus | What Does It Do? 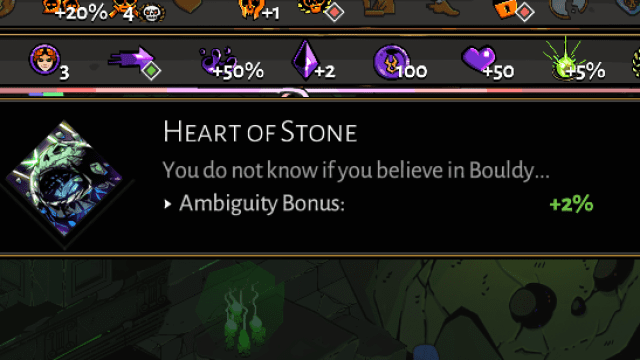 As you explore the underworld if Hades, you’re often going to run into sights that test your willingness to spend resources. Whether it’s sacrificing half of your health for a centaur heart or buying a burger from Charon, this game will test you. However, nothing will test you more than giving Bouldy nectar. And the reward for doing so seems… Random. And one of the bonuses is to a stat that we’ve never heard of; Ambiguity. What the heck? What is an Ambiguity Bonus in Hades?

What Does Hades Ambiguity Bonus Do? 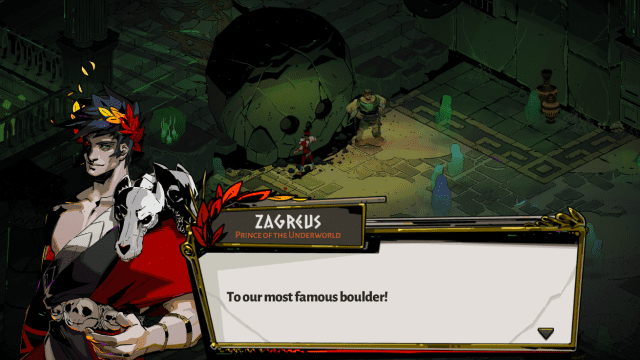 The Ambiguity Bonus that Bouldy gives you does nothing for your run. Unlike the other buffs, which grant you a small bonus to random stats, this one is completely worthless.

So, Bouldy and Sisyphus are a weird pair. Talking to Sisyphus is required to continue your run, and he’s handy for a small resource reward during the early game. You can take money, healing, or darkness; all are quite good!

You can talk to the stone, but he doesn’t really do anything. Bouldy the Boulder seems to be there just for the fun of it. But, there is something that you can do once you are friends with Sisyphus.

You can give Bouldy the Boulder nectar.

You might be thinking that this is a massive waste. However, at a certain point, you’ll have quite a bit of nectar on you. There are only so many people that you can give nectar to, after all! You can either transfer it to better resources – even getting up to Ambrosia and Diamonds – or keep it around to give to Bouldy. As a rock, he can drink an infinite amount of alcohol. He’d probably appreciate it.

The actual reward that Bouldy provides for you is a teeny-tiny bonus to a stat. This is usually 1-2%, but it’s permanent and just a nice add-on. It’s probably not worth its cost in nectar, but… You just gave a jar of Nectar to a boulder! And every percentage counts.

But, you have a chance to get Ambiguity, which is just nothing. It feels bad, but you are free to never make this mistake again. Or, you can keep worshipping Bouldy and usually getting small bonuses to stats. It might not be worth it, but it sure is fun!