Hades | Best Builds For Each Weapon 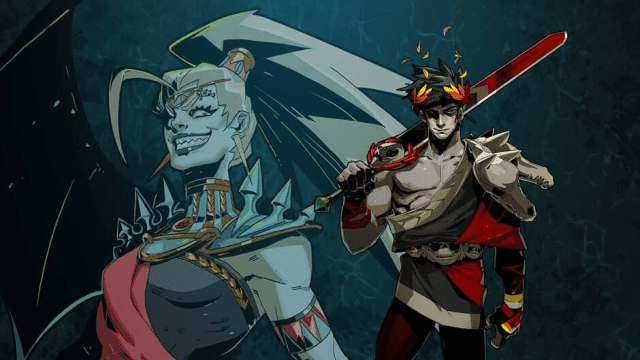 Escaping from Hades is quite a challenge. Especially as you’re trying out new weapons, you’re going to run into problems with dealing damage and staying safe. Brainstorming builds will be critical to ensure that you stay alive as you crash through encounters. Thankfully, with the help of specific Boons and Keepsakes, you can turn many builds into near-guaranteed options to help you escape from hell. Here are our picks for some of the best builds for every different weapon in Hades.

Best Hades Builds for Each Weapon

If you’re trying to beat Hades, you’re going to need a good build. While not all of them will be optimal every run, the following builds combine safety and power with something fun to make each run unique. Play around with them while you learn how each of the gods work! You might find a new favorite weapon with the right build path. 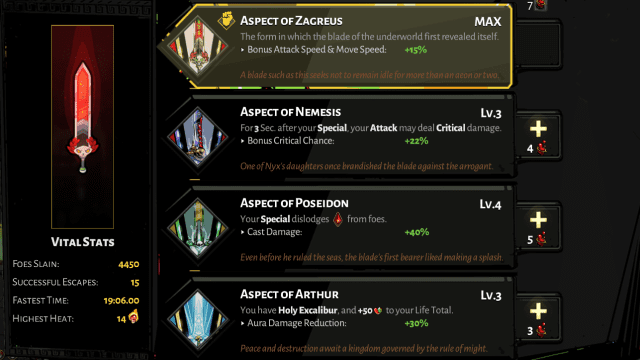 Do you want to one-shot some enemies? Because this build will one shot your encounters.

The last swing of the Aspect of Arthur is a massive sweep that hits for a base damage of 200. Add onto that Aphrodite (or Demeter) with their 100% or more attack buff and the damage bonus from Fiery Presence, and you’ll drop basic enemies instantly! Your goal in standard rooms will be to dodge around, building up your combo until you can hit them with the sword’s final swing.

Just to add to your damage, getting Hoarding Slash and Shadow Slash will be an excellent buff to numbers. They’re rare, of course, so don’t expect them every time you go for this build. Artemis’s Pressure Points gives you a minuscule chance to crit, too. With the Aspect of Arthur, Pressure Points offers a tiny chance to hit bosses for over 2000 damage! Make sure your cast can stick in them, too; that 50% damage will be critical for bossing.

Most Specials work fine with this build, but the Poseidon special offers you a bit of respite if you’re panicking, as well as access to Rupture Boons in the future. 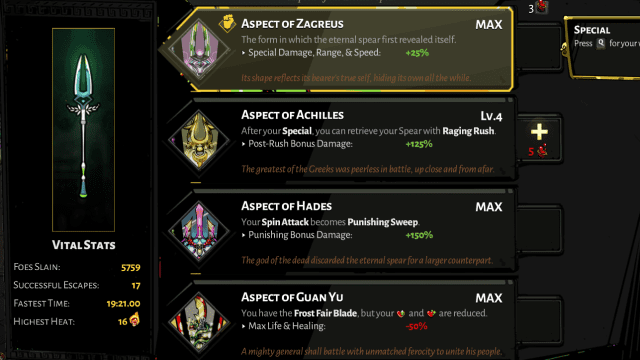 As weapon builds in Hades go, those based around Varatha tend to be easiest for new players. The spear has excellent range, and the default Aspect of Zagreus is capable of striking hard from afar. There’s little doubt that many newbies will inevitably wind up using it in a sort of stick-and-dodge style.

The strategy is simple: As soon as you enter a room, use Chain Skewer to apply Doom to all enemies. Run and dodge until the delayed damage takes effect, then hit everyone with the special again. If you can, look for Ares’ Impending Doom or the duo boon Curse of Longing to maximize Doom damage. Otherwise, spam your special and try not to get hit.

Note: This general strategy also works with the Shield of Chaos with the Aspect of Chaos or the Dread Flight Daedalus upgrade. 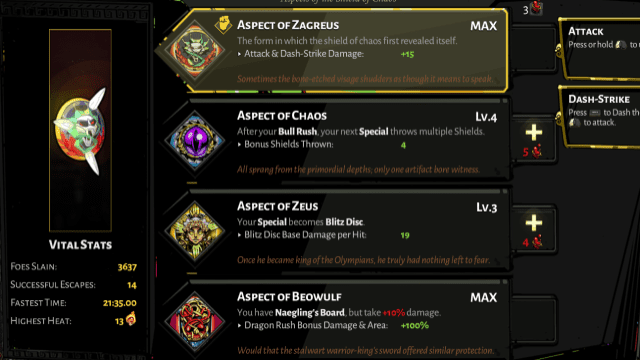 Load up and get ready! This build requires you to get the Aspect of Beowulf, a secret shield that you get after you unlock the Aspect of Guan Yu. You may want to make acquiring this Aspect a priority, because this build is bananas!

Your goal is to load your cast into your shield, move to one side of the arena, and then rush towards enemies to decimate them. Almost all casts work, but Aphrodite’s deals massive damage to everyone nearby, and tends to work best. The Artemis cast also works well. The important thing is to get a cast early on, then use the Shield Charge attack to block damage. 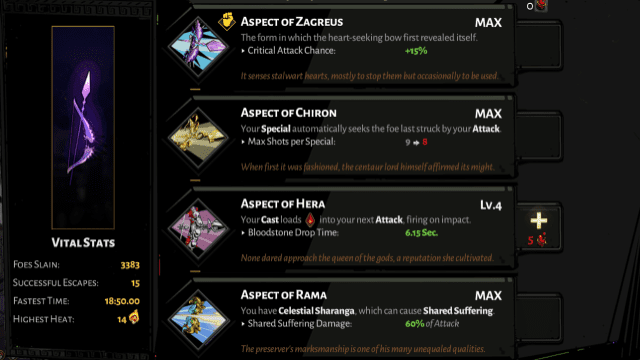 While the Aspect of Hera build is no doubt the highest damage (See the Shield of Chaos build for a general idea for how that works), this build is easy to get and very safe to play with.

The Aspect of Chiron causes all of your special attacks to target the enemy you’ve most recently attacked. So, with Zeus’ special, all of your special attacks also strike that target with bolts of lightning! Alternatively, you can quickly build stacks of Dionysus’ special or Demeter’s special, overwhelming your enemy with stacks. If you go with Demeter, try to get Arctic Blast to get extra blast damage when you clear 10 Stacks.

The Relentless Volley Daedalus upgrade will greatly accelerate this build, adding four more shots to your special. Otherwise, the rest doesn’t matter too much. Aphrodite’s attack combos well with the gods listed, and Artemis’ attack can also boost your numbers. 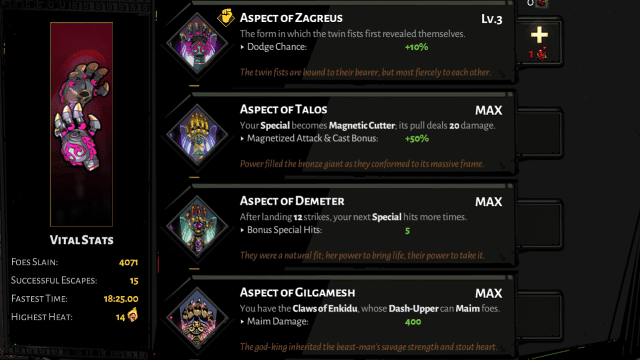 In addition, the Chill provided by Frost Strike immediately satisfies one of the curses required for Privileged Status. Dionysus’ Drunken Flourish quickly provides another, as does Weak provided by Aphrodite’s Heartbreak Flourish.

The main strategy with this build is to use the Magnetic Cutter to pull in enemies from across the room. The Aspect of Talos buff will immediately provide a damage bonus, and Privileged Status will kick in by the time your very first punch lands. So long as you’re using Frost Strike, you can easily be dealing +130% base damage before you even leave Tartarus. Overall, this is one of the best ways to beat Hades himself. 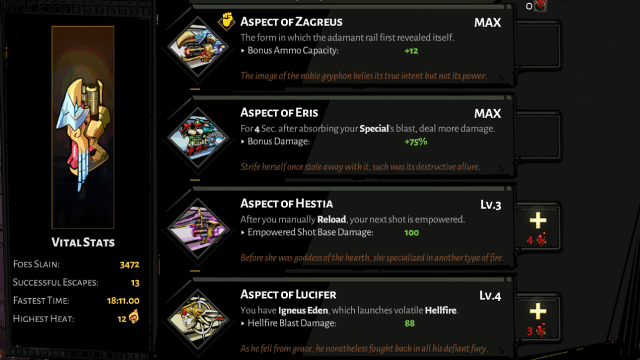 This build uses the Aspect of Eris’s special damage buff with Zeus’ chain lightning attack to devastate entire rooms of enemies. The strategy hinges around the Aspect of Eris itself, which can increase your total damage by 75% when fully upgraded. These turn your bullets into extremely high-damage projectiles… and also makes Zeus’ attack nightmarishly strong.

All you need to do is get Zeus’ attack boon and run around the room, firing at enemies while focusing on dodging. Use the Poseidon special to push enemies out of your special to give you some safety, and you will hit for over 50 damage per rapidly firing bullet.

From there, be sure focus on ways to improve your safety (with gods like Athena or Aphrodite) and increase attack speed (with boons from Hermes) and damage (from Demeter or Ares).

It’s worth keeping in mind that these are meant to be the very best builds in Hades. As such, many will rely on rare weapon aspects or fully upgraded aspects to work. If you’re still a starting player, we’ve got a separate guide on how to get your first clear.

Love Hades as much as we do? We have a few other guides to help you think about your runs in different ways!