High On Life | Which Movies Are In The Game? 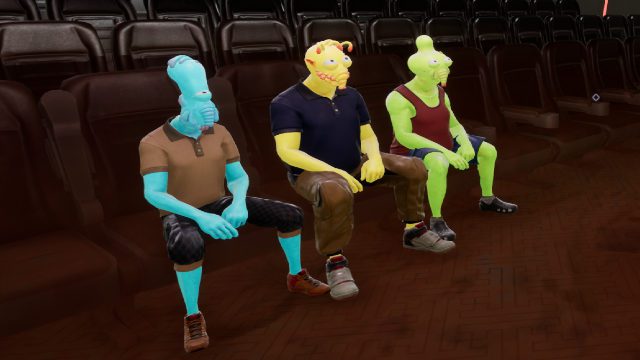 What comes to mind when you think of High on Life? A raunchy space shooter from Squanch Games? The next big creation from Justin Roiland? Aliens with buttocks for faces that can play the drums? How about full-length feature films from our real world? Indeed, the hilarious FPS not only hosts interdimensional cable but also includes a few movies that you can watch. Why are these movies a part of the High on Life experience? We have no clue, but here are the films that you can check out when taking a break from collecting bounties.

Which Full-Length Movies Are in High on Life? 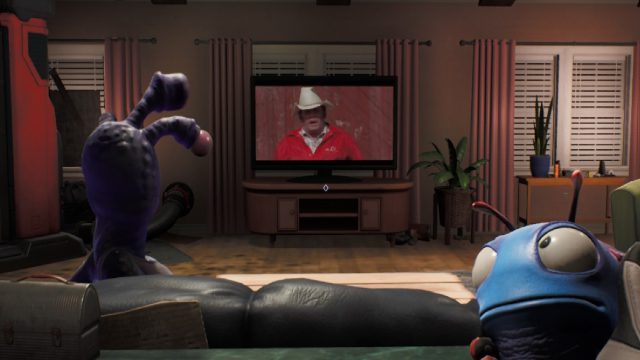 High on Life features four movies that you can watch within the game. The four films are Tammy and the T-Rex, Vampire Hookers, Blood Harvest, and Demon Wind. All movies were released before the year 2000, and they have mostly been left in the dark. However, Gene and a certain cinema are bringing them back into the spotlight, if only for a short time. Each film occurs differently in the game, so we’ll go over each one with some info on what you’ll watch.

The first film you’ll run into in High on Life is Tammy and the T-Rex. Gene, the amputated, washed-up bounty hunter, can be seen watching this sci-fi comedy flick while slumped on the couch. It’s a love tale that involves the murder of Michael, whose brain is implanted into a dinosaur by a mad scientist after some vicious bullying. He then wreaks havoc on the ones that hurt him while attempting to reunite with his girlfriend, Tammy.

Additionally, the game features the uncensored Tanny & and the Teenage T-Rex version that spills more blood and guts than the theatrical release. You can watch this by hanging out with Gene at home during the early stages of the game, mainly your first couple of bounties.

This comedy horror will be the second film to screen at your home after Tammy and the T-Rex. In a nutshell, this film follows the aging vampire Richmond Reed who recruits three fellow ones to pose as prostitutes in order to lure unsuspecting customers to his lair. It stars John Carradine in the leading role, who was well-known for his Shakespearean and horror characters in cinema. The film received mixed reviews.

After the interdimensional cable enters your home, Vampire Hookers will then be the second film to premiere at home. You’ll evidently notice it in the midst of all the animations that appear on TV as well.

Blood Harvest will be playing on the TV later on as the third licensed film to screen at home. This slasher film’s plot revolves around a young girl returning to her rural home. However, everything has flipped: her house has been vandalized, her parents are missing, and the town despises her father. Only the town’s clown seems to like her. But what happens when those close to her begin to disappear? Who could be behind these heinous crimes? What else could go wrong?

This will be the last movie you run into at home unless you know where to go for the fourth and final film. 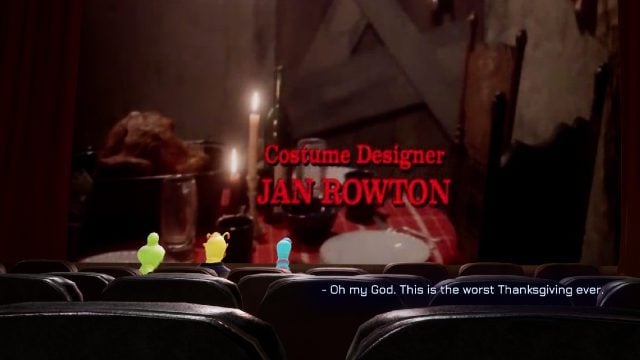 Demon Wind follows the investigative tale of Cory and his pals as they go to look into what happened to his grandparents. After peeking a little too deep, they discover that the grandparents were involved with dark magic. Soon, Cory’s friends start turning into demons while a mysterious fog lingers on.

If you’re waiting around at home for Demon Wind, you’re in the wrong place. To watch Demon Wind, you’ll need to purchase the Movie Theater Warp Disc from Blorto in Blim City. Take that Warp Disc to a warp signal to activate the coordinates of the theater. Doing so will summon the location to your area, where you can then venture inside for a sweet surprise. Take a seat in the theater to witness three individuals providing commentary throughout the film, a homage to Mystery Science Theater 3000.

Aside from checking out the four films in High on Life, we have other guides here to help you along the way!