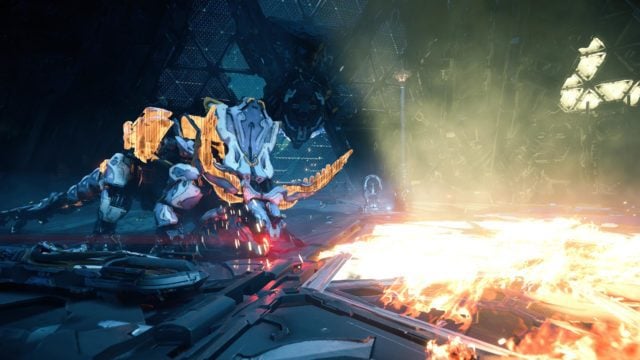 If there is one thing we expect from Horizon Forbidden West, it is to fight some cool dinosaur-like machines. It takes some time before you can face a big one, but you will eventually and they are not easy to beat! During the Dying Lands quest, you are going to face Grimhorn, a triceratops with heavy armor and flame attacks. Aloy has some allies with her during this fight, although this is not going to make things easier. Prepare your acid arrows and berries to survive this battle.

How to Beat the Grimhorn Boss in Horizon Forbidden West

To beat a Grimhorn, you need to focus on shooting its weak spots on its back and side with Acid Arrows. The first time you fight it, you’ll have party members that you’ll need to help as well. To avoid some of its attacks you must know how to position yourself during the fight.

The quest “The Dying Lands” takes you to a facility after the machines have run amok and are attacking everyone in the region. After going through a series of rooms with puzzles, you end up in an arena where you will fight the Grimhorn boss. Even though it is only a Level 18 boss, this fight can get pretty difficult. You might think it would be easier since you have in your party other two characters, but it isn’t.

First, during the fight, Grimhorn is not your only enemy. There are smaller machines that your allies are supposed to fight while you handle the big boss. While it may seem risky, your best bet is to focus on Grimhorn while you’re partners handle the smaller machines. If you’re not paying attention, the boss will run over you and do a lot of damage.

Grimhorn is heavily armored so finding its weak spots is not easy. The easiest ones to find are on its back and each side of its body. However, the boss is weak against acid and purgewater. There are some acid traps in the arena too, so you can take advantage of them to destroy its armor.

At the same time, to avoid its attacks, you should use your rolls and try to keep some distance. There are some attacks, like a big cone fire attack, that are easier to dodge by staying close to the boss and rolling to the sides.

Here are some other guides on Horizon Forbidden West: