The Sea of Sands is not only a place where the past is hidden below the sand. There are also powerful machines. Horizon Forbidden West consistently introduces new and unexpected machines to which Aloy must fight. This chapter has one of the most impressive, the Tideripper. Based on a prehistoric creature, this is a boss you will need to face before advancing with the story. Learn its weaknesses and pave your way to victory!

How to Beat the Tideripper in Horizon Forbidden West 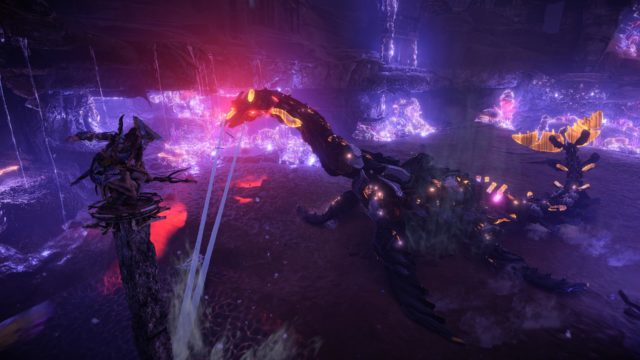 To defeat Tideripper, take advantage of the higher ground. From there, try to aim for its big weak spots that you can easily hit. The boss is weak against fire, so be sure to equip any weapon of this element you may have.

While Aloy explores the desert region of what once was Las Vegas, she ends up facing the Tideripper. This is a level 26 boss that you must defeat to complete the question. It is a giant and powerful machine that has a lot of different attacks. On the other hand, you also have a very wide arena with berries to pick up and boxes with crafting materials. One important aspect of it are the poles in which you can climb, staying on the higher ground.

Because of its size, Tideripper has many weak spots that aren’t difficult to hit. For example, both sides of its neck, and a big disc on its beck. At the same time, this is not a static boss. It not only has some movements that are gap closers,but it also has long and short distance attacks. In other words, Tideripper can jump in your direction and attack you in melee or throw jets of water at you if you are too close. Or it will throw spheres at you.

The best strategy is to not stay at the same place. You might be able to find a rock to have cover, but this hideout won’t last long. Keep running and once you are distant enough, climb one of the poles in the arena. By having the higher ground, you can easily shoot the disc on Tideripper’s back. In some situations, it can even try to get a short distance and attack you while you are up there. However, it won’t hit you with these attacks while you are there. Another important tip is to use weapons of the fire element, since it is weak against it.

In case you need more help with Horizon Forbidden West, we got you covered!