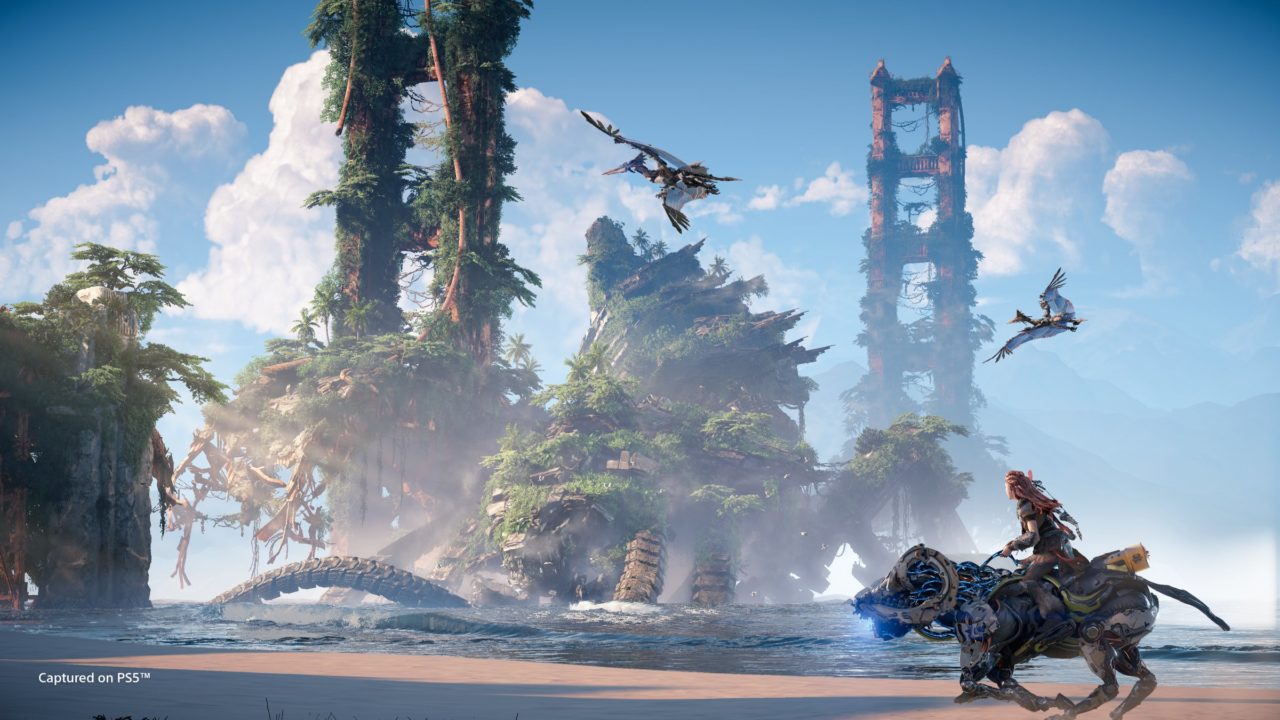 A 14-minute gameplay trailer for Horizon Forbidden West has revealed new gameplay elements, including a glider and a grappling hook. PlayStation’s State of Play event debuted the footage, which also hinted at the game’s plot and a range of different gameplay mechanics.

Forbidden West is a sequel to 2017’s Horizon Zero Dawn, taking place 1,000 years from now in a post-apocalyptic future. A red fungus known as the Blight consumes life across the planet, with mechanical animals also ravaging the world. Players control Aloy, a survivor of these threats, as she investigates the Blight and attempts to save humanity from its terrors. In this gameplay, she rescues an ally of hers kidnapped by raiders, held near the decaying Golden Gate bridge in San Francisco.

Most significant, this PlayStation 5 footage takes full advantage of the new hardware’s capabilities. Light physics are a step up from the original, rippling through the forest roof, and improved water mechanics make the rivers seem so lifelike in how they shimmer in the light. Character models are also greatly improved – but this footage is from PS5, so PS4 versions may not look as impressive.

Forbidden West also introduces a wide range of gameplay mechanics. The trailer highlights free-running and traversal, as Aloy hops over ledges, climbs up walls, and swims through lakes. The game introduces the Focus Scanner, which highlights vantage points and climbing routes if you find yourself lost. Also new is a grappling hook, which propels players to higher altitudes within the map. On the reverse, there’s the Shield Wing, which acts like a parachute, letting Aloy gently land on the ground or get a drop on enemies from above.

The trailer ends with Aloy taking down a Tremortusk, combining bow-and-arrow combat as well as a variety of blasters. She can fight while riding animals, with increased real-time damage. In the footage, the beast smashes through wall, and loses large metallic chunks during battle. The trailer doesn’t give a release date, which may bring into question the game’s proposed Q3 2021 launch date. However, it does promise both PS4 and PS5 versions, ensuring players on both consoles can get in on the action.