Metroid Dread | All Upgrades In Order 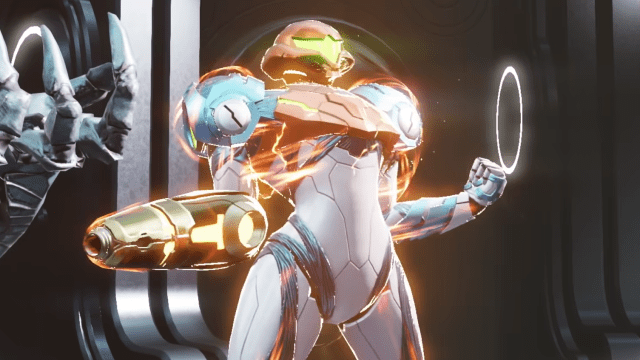 Welcome to planet ZDR, bounty hunter. Metroid Dread brings the horrifying elements of outer space to the forefront of modern Switch gameplay. And with Samus as your protagonist, you’re going to need to be able to explore every nook and cranny! Metroid Dread upgrades are critical to your progress, and you’ll be going back and forth during your journey to collect them all. If you’re worried that you missed an upgrade, we’ve got you covered!

All Metroid Dread Upgrades In Order

There are 25 different upgrades to collect in Metroid Dread, not including energy tanks or increases to missile capacity. These are the upgrades that will give you new abilities or allow you to access new areas. The catch is that you can’t reach later upgrades until you’ve found the previous ones.

As such, it’s possible to work your way through the game following the path of upgrades in order. This is especially helpful if you’re wondering where to go next after the Space Jump or Grapple Beam, for instance. Granted, some of these can be earned early. But by and large, you can complete all of Metroid Dread by collecting these upgrades in this order.

Samus charges her gun and fires it out. You’ll need to destroy a fake block in Artaria, in the southwest corner of the map. Just keep going to the lower left after crushing the fake block; you can’t miss it!

A little climbing tool. To get it, destroy the Central Unit in Artaria to get the Omega Cannon, then fight the nearby EMMI. Use the Stream to melt it’s armor and the Blaster to destroy its head. Then, loot the body! 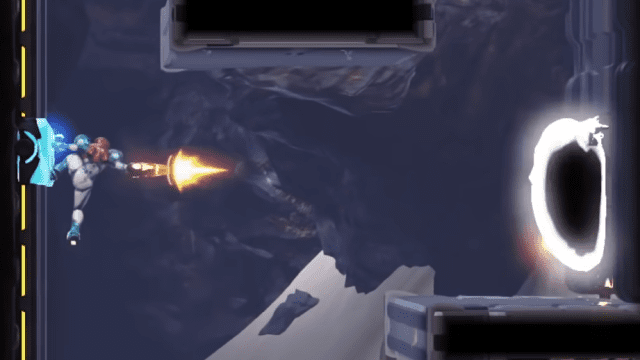 Corpious is the game’s first boss. Once you run into him, slay him and you’ll get the Phantom Cloak! This is used to hide from light; perfect for stealth areas.

A triple-shot that drastically boosts your rapid-fire damage, and unlocks Wide Doors. In the central area of Dairon, head through the dark room. Get through the narrow passage in the ground and activate the generator. Through the upper right area, shoot the power beam door and the following missile door.

The ol’ reliable Morph Ball is needed to duck into tiny little areas. Find it by getting the central unit in Cataris and using the Omega Cannon to decimate the Green EMMI.

Head to the left EMMI zone door, once you’ve gotten the Morph Ball. Drop down the passages with the ball, and fire to reveal a path above the sealed door. The Statue has a narrow path, which you teleport through. Activate the Thermal Device and flee from lava. It’ll lead you right to the Suit Upgrade; the awesome Varia suit.

An absolute cannon of a laser beam. You get it after defeating Kraid by climbing up the east wall and morph-balling into the passage.

Find the Dairon Generator, and head towards the Total Recharge Station. Head to the right towards the Missile Door, and head right through. There’s your bomb! Perfect for parkour and breaking basic objects alike.

Head to the left save station of Burenia, Go down until you reach water and head to the upper right to morph ball through a passage. Head through the area to get the Flash Shift, a quick dash maneuver. 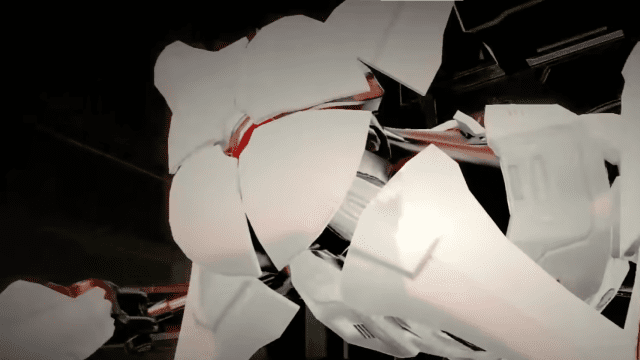 Head to Dairon and locate the Central Unit. You can take it down now, so defeat it and take out the Yellow EMMI. That’ll get you this combo, which is a movement speed increase and then a super strong dash!

Your beam goes from full offense to a mobility tool! In the northeastern area of the map, exit the northern save station and head to the bottom door. Keep going southeast to get the grappling hook.

This missile packs a punch, and opens yellow Super Missile Doors. Head to Dairon and Bomb near the Power Beam Door. This’ll open a passage to a missile door where, if you walk right through, you’ll get the Super Missile.

Double jump time! Head to Ghavoran and go underwater. There’s a narrow passage near the Spider Magnet. Head through it and go through the Morph Ball Launcher.

This’ll help you find any nearby hidden blocks. From the red teleportal in Cataris, use a bomb to head south towards the heat area. Travel through the room – you’ll need the Grapple Beam. Head through the Orange Teleportal to go to Ghavoran. Jump left and roll into a narrow passage; let the pitfall guide you! Slide under the sealed door to get your Pulse Radar!

After you see the cutscene with the X-Parasite, and after you destroy it, destroy the obstruction above the wall. Head into your morph-ball and follow it. Then, you’ll get your multiple-piercing, door-opening newest upgrade.

Destroy the Central Unit of Ghavoran and use the Omega Cannon to destroy the Blue EMMI. You’ll get Ice Missiles from that, which can freeze enemies and allow you to jump on them. 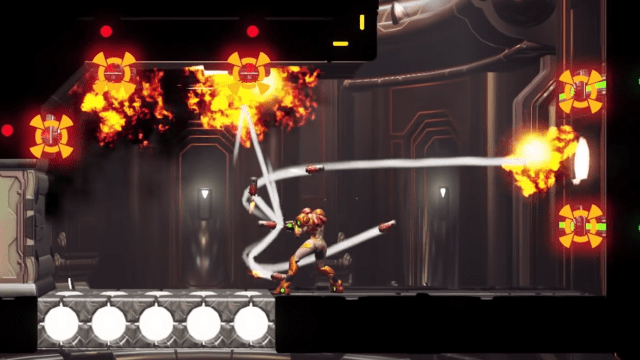 This tracking stream of missiles is needed to unlock multi-locks on doors. Destroy the Worm Door and kill Escue to get the upgrade from the green slime. Gross! But awesome!

When you get your Storm Missile, head to Ferenia. In the northern area, there’s a Storm Missile Box. Crush it and destroy the missile door to get your Space Jump… Or infinite jumps!

Go to the bottom left of the eastern Burenia room and jump to the bottom of the Missile Door chamber. Head through that using Space Jump and you’ve got the gravity suit; a combat upgrade, anti-cold and lava, and free-swim!

Head to the far-right teleportal in Cataris that sends you to Artaria. Go to the grapple beam block to the west and destroy it, and then head below to the left plasma beam door. Morph Ball through the left to get the Screw Attack, capable of destroying blocks with an electricity symbol on it.

Once you destroy the Worm Door in Ghavoran, head through the small nook with your Morph Ball. There you’ll find Golzuna, a mini-boss. His green slime will grant you access to the Cross Bomb, a larger bomb blast perfect for exploration.

The final bomb upgrade! To get it, head to Hanubia through the elevator from Ferenia. Head west, and then climb the area with the valve. Destroy the Screw Attack block and follow the chozo soldier through the door. Head through the EMMI zone and defeat the Chozo soldier in a fight. Bam, Power Bomb!

You can now shoot through walls and projectiles with ease! Head to the central unit in Ferenia to get the Omega Cannon. This can destroy the Purple EMMI, so take it down with the Omega Stream and Blaster. Then, you can collect the upgrade from its body.

The final suit, and the ultimate combat armor. You’ll get this during the final boss fight against Raven Beak; the same time that you get Hyper Beam.

The final beam upgrade that you get access to. You’ll get this during the final boss fight against Raven Beak; the same time that you get the Metroid Suit.