New World Endgame | What To Do After Level 60

The endgame is a key part of any MMORPG, and New World is no exception. While the leveling experience is still a bit more important at the moment, that will slowly start to change as soon as enough players hit max level, which currently sits at level 60. Once that happens, most players will turn to focus their attention pretty much exclusively on the content that unlocks upon reaching the level cap. But does New World have enough endgame content to keep players invested for the long haul? We certainly think so. Keep reading to learn about all the things you can do in the game after reaching level 60.

What To Do After Reaching Level 60 in New World 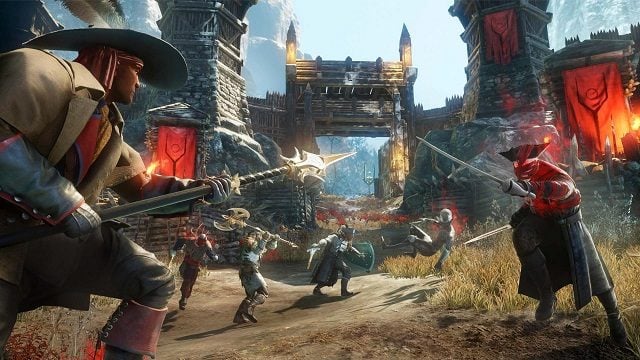 There are several new activities that will unlock once you reach level 60 in New World. Thankfully, nearly all of them offer the chance to earn increasingly better pieces of gear. Your gear score will likely be around 500-ish when you reach the level cap, and you can take that up to 600 with enough time and patience. Similar to most MMORPGs, the New World endgame is heavily focused on making your character more powerful through PvE and PvP. Here are some of the best ways you can achieve that.

Outpost Rush is one of the first things you’ll want to look into once your reach level 60. This is especially true if you’re a fan of PvP. You can join this 20v20 game mode either solo or with a group by speaking with your faction rep. Outpost Rush requires you to complete both PvP and PvE objectives and is a fantastic way to gear up your character. Not just that but you can also earn a whole bunch of gold and resources in the process. Outpost Rush is only available to level 60 players so you may need to spend a bit of time in queue if you’re on a low population realm. But the wait is definitely worth it for the rewards alone.

Legendary weapon quests should be pretty high up there on your to-do list at level 60. There are only a couple of requirements you’ll need to fulfill before you can embark on an epic journey to claim a legendary weapon. These include reaching level 20 mastery in the weapon type you want to acquire and completing a series of quests for Eintou Madaki in Mountainhome. These quests are quite difficult but at the end of it all, you will be rewarded with a power level 580 legendary weapon. That’s pretty much as good as it gets outside rare boss drops.

If you want to quickly earn some good gear, you should see what your faction has to offer. Once you reach level 60 you’ll be able to buy new pieces of faction gear that are probably better than what you’re currently wearing. Of course, you’ll first need to max out your faction standing before you can get your hands on them. You’ll also need some faction tokens and a decent amount of gold to buy the gear. If you’re still not sure which faction you should stick with, check out this guide to learn more about the three New World factions.

New World launched with six Expeditions, which are the equivalent of dungeons in other MMOs. Expeditions are not only great places to farm XP while leveling, they’re also a great source of loot at max level. In particular, you’ll want to focus on Garden of Genesis and Lazarus Instrumentality, both of which are level 60 Expeditions. They can be found in Edengrove and Reekwater, respectively. While a bit lower in level, Dynasty Shipyard in Ebonscale might be worth running a few times too.

If you’re a long-time World of Warcraft player, you probably associate Arenas with PvP. However, here they’re a PvE activity. Spriggan Arenas are essentially small-scale raids where you get to team up with four other players to try to take down a very powerful boss called the Spriggan. The fight is very challenging, and there’s also a time limit. Make sure you don’t go in unprepared. Accessing the Arena itself is a bit tricky as well, since it requires you to find a special key. Luckily, only one member of the party needs to have the item in their possession. If you don’t have a key, use the chat to find other players that do.

Also known as Corrupted Portals, Corrupted Breaches are a type of PvE activity you can start joining well before level 60. In fact, farming Portals is one of the best ways to level up quickly in New World. But Portals continue to remain relevant even at level 60 since they reward you with lots of valuable resources and loot. Corrupted Breaches spawn very frequently so you shouldn’t have problems finding them just by looking at your map.

Failing to reduce the corruption level of a territory by closing the aforementioned breaches will eventually lead to a Corrupted Invasion. You can take part in this PvE event starting at level 50. But, just as before, joining at level 60 will earn you much better rewards. The rewards come in the form of loot chests that contain high-end gear, gold, and even Azoth. The quality and quantity of these rewards can vary depending on how well you did during the event. You can use the Settlement Town Board to sign up for Corrupted Invasions whenever they become available.

Wars are massive PvP engagements where factions and Companies fight over territories. Similar to some of the other activities described earlier, you don’t need to be level 60 to participate. But you will get more out of it by joining the fun at max level. Wars are fought between two teams of 50 players. They also involve siege engines, traps, generators, and various other weapons of war. If you love PvP, you definitely don’t want to miss out on these epic engagements.

Defeating elite mobs is another great way to raise your gear score, especially as a fresh level 60. You can find these enemies by investigating points of interest across all territories. Fighting elite mobs isn’t quite as engaging as some of the other endgame activities but it is a lot easier. That said, it’s still wise to team up with a couple of other players before you attempt to take them on. Just in case.

Now that you have a pretty good idea of what to do once you reach level 60 in New World, make sure to check out some of our other guides down below.