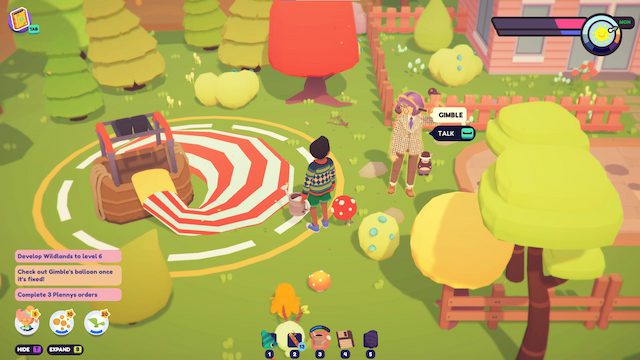 You’ve most likely come across Gimble’s hot air balloon while exploring Badgetown in Ooblets. That is, you likely discovered the broken version. However, you can repair Gimble’s balloon and then use it to travel to different regions, not only to progress in the game but also to discover and collect rarer Ooblets. That’s why, in this guide, we’ll walk you through every step of repairing Gimble’s hot air balloon.

How to Repair Gimble’s Hot Air Balloon in Ooblets

To repair Gimble’s hot air balloon, you must first complete three tasks for Mayor Tinstle. After you’ve completed three, she’ll assign you a new task of restoring power to Oobnet Tower. The tower is located directly to the right of the Wildlands gate. Once inside, you’ll need to win a difficult dance battle to restore power to the tower, so be prepared. When you win, Tinstle will give you a new task of repairing Gimble’s balloon.

Now that you have the task you can see you need one Oobsidian, 20 Planklets, 12 Nurnies, and eight Clothlets in order to repair Gimble’s hot air balloon. And you’ll be relieved to hear all of these items are relatively easy to get.

If you’ve been rummaging Badgetown, you’ve probably found an Oobsidian, but if not, you can buy one from the Wishywell for 100 wishes. You can get Planklets by destroying logs and Nurnies by destroying rocks, so maybe it’s time to clean up your yard. Lastly, are Clothlets which can be found around town, but you most likely won’t find eight. That’s why it’s best to buy them from Meed’s Seeds and grow them yourself.

Drop off all the deliverables for Gimble, and he’ll begin working on repairing the hot air balloon, which will take a day or two. After that, you’ll be able to use the balloon to explore new areas of Ooblets. The first is Mamoonia, which is brimming with new seeds and rare Ooblets to collect.

For more help with Ooblets, check out some of our other guides: