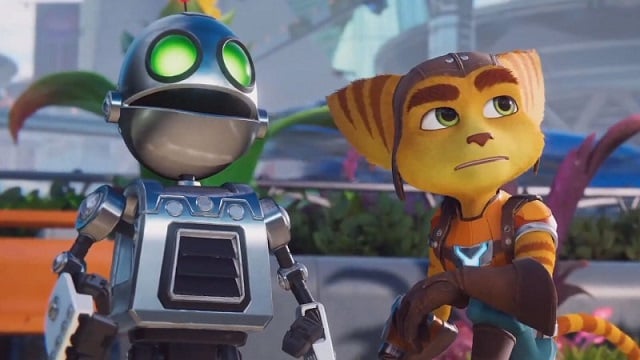 As with past entries in the series, Ratchet & Clank: Rift Apart will occasionally let you take control of the nerdy little robot for a puzzle section. Throughout the game, you’ll come across Clank puzzles, that can be a bit confusing to figure out. In this guide, we’re going to go over how to solve them!

How to Solve Clank Puzzles in Rift Apart 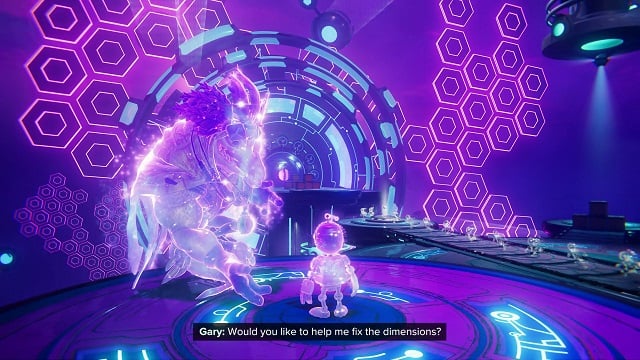 The general idea behind solving a Clank puzzle in Rift Apart, technically called Anomaly puzzles, is for you to follow images of Clank, called possibilities, to the meta terminal at the end of the area. Most of these puzzles will be solved by using various spheres that, when thrown at specific points, will cause an effect that can help you guide your possibilities. Each Clank puzzle will have you go through three rooms to solve the anomaly.

The first Clank puzzle will act as the main tutorial section for how the puzzles work. The first room is very simple, grab a lift sphere on the right side of the room, toss it on the platform, and your possibilities will be lifted to the platform above and go into the terminal.

The second room will likewise be pretty easy to get. This time, you’ll see a speed sphere to your left and a barrier of hexagonal boxes to the right. Grab the speed sphere and toss it down in front of the barrier, and use it to break through the blocks. On the other side, there will be a lift sphere.

In the last room, you will see a long walkway with pneumatic presses along the way. At the starting area you’ll find a lift sphere that can be used to stop the first press. Once you interact with it, make your way to the other side of it and recall the sphere.

To the side you’ll see a branch on the path with another press and a speed sphere on the other side of it. You’ll once again use the lift sphere to make your way to the speed sphere. After you pick it up, run back to the main path and recall the lift sphere.

At the end of the pathway, you’ll see another branch to the left, with a barrier at the end of it. Toss the speed sphere on the platform in front of it and break the barrier down, revealing another platform. Use the lift sphere on this one, and in combination with the speed sphere you’ll be able to make the jump to the raised platform on the other side. Here you’ll find another lift sphere.

Next you want to jump back and recall the other spheres. At the end of the walkway, you’ll set up the same combo of speed then lift to make the jump. Then you’ll use the second lift to raise the first press on the walkway. Step on the direction button, and stay there until your possibilities unlock the terminal. 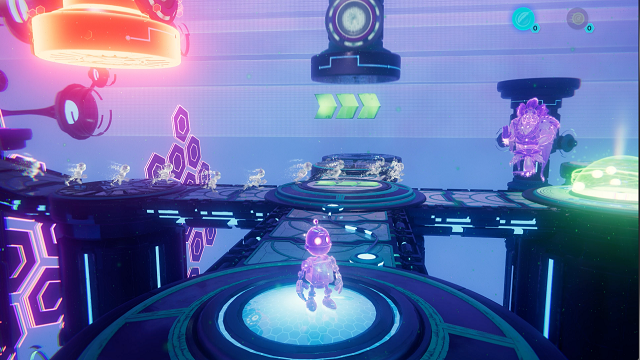 The next of the Clank puzzles will take place while you’re looking for phase quarts. Like the previous one, this will require you to make your way through three rooms.

Room one will have a main walkway leading to the terminal, with a raised platform and obstacle barrier blocking the terminal. Additionally, there will be a directional button on the right side of the walkway, with a fan pushing the possibilities towards it. At the start of the room, there will be a heavy sphere.

Grab this sphere, then run to the end of the path, using it on the raised platform. To the left there will be another heavy sphere. This one you’ll use on the saw above the barrier, destroying it. Recall the sphere, and use it on the platform in front of the fan. Go step on the directional button, and stay there until the terminal is unlocked.

The next room will have a main walkway leading to the terminal, with a branch on the left and right sides. To start, you’ll jump ahead to the right, using the moving platform to grab the lift sphere. You’ll then go to the left, using the lift sphere to reach the heavy sphere.

At the end of the walkway, you’ll use the speed lift combo once again. Additionally, you will use the heavy sphere to lower the saw blocking the way. Your possibilities will unlock the terminal and you can move on to the last room.

For the final room, the main path will have multiple fans, with branches to the right and left for you to explore. To start, you want to make your way to the branch on the left side, picking up the heavy sphere on the way. You’ll use this to lower the saws at the end of the branch, letting you grab the lift sphere.

From here, you’ll set the lift sphere on the platform in front of the first fan. On the next platform, you’ll set up the speed sphere. And on the third, you’ll put down the heavy sphere. With this, your possibilities should be able to make it to the terminal and solve the Clank puzzle. 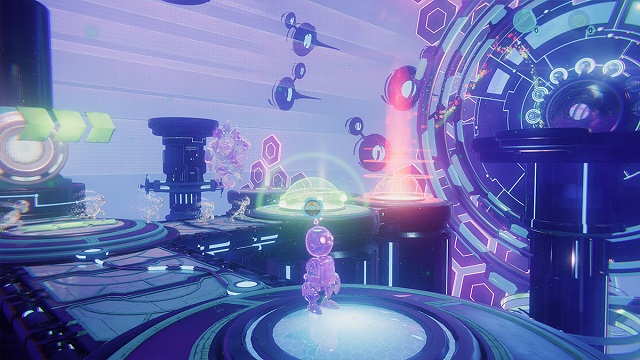 On your return trip to Sargasso, you’ll need to solve another anomaly. The main difference is that this time you’ll be playing as Clank’s interdimensional counterpart Kit. But since this is the only one, we’ll count it as a “Clank” puzzle.

Directly ahead of you you’ll see an electric sphere. Pick it up and use it on the platform on the left, letting you and your possibilities make it to the other side. You’ll find another electric sphere, though picking this one up will move the directional pad and lower a platform with a lift sphere on it.

You’ll use the second electric sphere on the generator near the terminal, switching the directional pad there towards the exit. Then use the lift sphere on the space between the button from earlier and the directional pad it reaches. Once the possibilities are all running to the right, you’ll move the sphere in front of their new path. With this, the possibilities should be able to unlock the exit.

In the next room, you’ll once again grab the electric sphere at the start and use it on the wire platform. Once you reach the other side, recall the sphere, then use it on the wire to the left. Grab the sphere there, return to the main platform, and recall both of them.

Throw one of the spheres back to the starting wire, letting the possibilities make it across. Then throw the second on the wire to the left, lowering the right platform. Jump on the button there, adjusting the directional pad. Recall the second sphere, and rethrow it on the generator. This will lead the open the path for your possibilities. Let them unlock the terminal, and make your way to the next phase.

Place the heavy sphere in front of the fan at the start of the room. Then, place the lift sphere on the spot in front of the button that shifts the platform in the middle section. With this, the possibilities should be able to reach the terminal.

The last of the Clank puzzles will take place on Savali when you return for the dimensional map. Naturally, these will be the most difficult in the game.

Starting off the room you’ll grab jump down to grab the electric sphere, stopping to break the crates on the way. Toss the sphere onto the generator to raise the platform. You’ll then go and pick up the two heavy spheres along the main path.

Use the first heavy sphere to lower the platform that the possibilities are moving towards. Use the second sphere on the spot in front of the fan, then run to the next raising platform before they reach the button. This will let you grab the second electric sphere.

You’ll stand on the button the sphere was on, letting the possibilities make their way to the terminal. Toss the electric sphere to the wire leading to it, and remain there until the terminal unlocks. With that, you can proceed.

On the spot before the first direction pad, place the speed sphere. To the right of it, you need to put down the lift sphere. Then use the buttons to direct the possibilities left and right, destroying the barriers. To the right, you can pick up another lift sphere, followed by a heavy sphere.

You’ll put the heavy sphere on the saw blocking the way to the terminal. Next, a lift sphere at the end of the raising platform. Then, at the gap where you previously had the lift sphere, you’ll put down the speed lift combo again. Stand on the button that lifts the platform, and you’re good to go.

For the next room, you’ll start by using the electric sphere to activate the L-shaped wire and use it to grab a lift sphere. The lift sphere will be placed on the spot in front of the gap to the L-shaped wire. This will lead to the platform to the left being lowered, and you pick up a heavy sphere.

Stay on this platform, and then recall the other spheres. At the top, you’ll use the electric sphere to travel to the platform across from it and pick up a speed sphere. You’ll recall the orbs and jump back down. You’ll set the speed lift combo at the gap, and then use it to reach the highest platform.

There aren’t a lot of Clank puzzles in the game, but they can definitely be a head-scratcher when you come across them. Hopefully this helps you on your adventure.