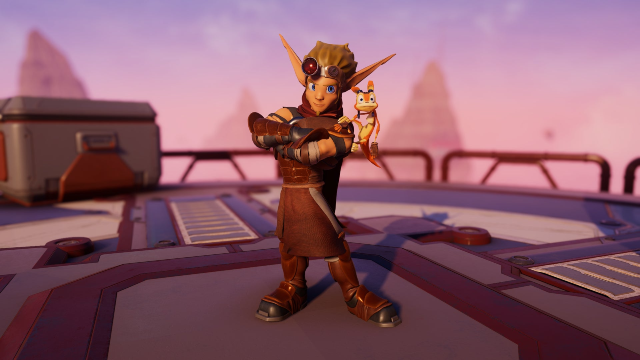 Rift Apart, the newest installment in the Ratchet and Clank franchise, sees our heroes combat a different set of threats. With new dimensions and the ruthless Dr. Nefarious at large, the universe needs our heroic Lombax and his robotic companion now more than ever. Yet, amid the colorful chaos in Ratchet and Clank: Rift Apart, there are dozens of PlayStation easter eggs that you can discover along the way. One of these just to happens to be a subtle reference to Naughty Dog’s Jak and Daxter. 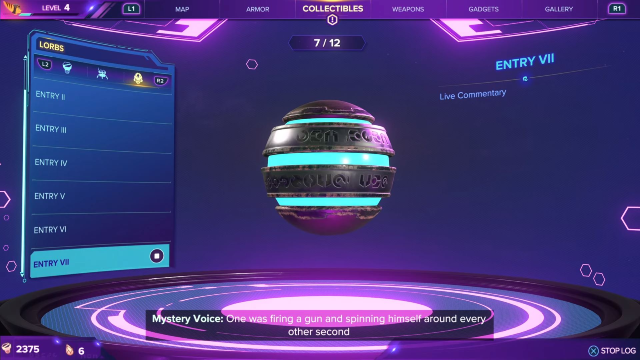 It’s best to play the game for a while before you start looking for this special treat, though. For starters, your quest will begin once you reach the bright and open planet of Savali. You’ll then head into central town to speak with a Monk Scholar. He’ll send you on a journey to collect 12 Lorbs in exchange for a new set of armor. It won’t be until the seventh Lorb collected will you have your Jak and Daxter reference.

While utilizing your hoverboots to explore the land, you’ll eventually stumble upon the Lorb locations. As it turns out, these locations are actually Lombax shrines, with a Mysterious Voice providing recording logs detailing his mapping challenges and the Dimensionator’s importance. With each collected Lorb is more lore from this Mysterious Voice to add to.

Explore Savali and continue to gather these special items. Once you found your sixth (and it doesn’t matter what order you find them in), head to your seventh, grab the Lorb, and head to your Collectibles menu. Scroll down to Entry VII, and the Mysterious Voice will begin to recall a brief moment from his work. According to him, he travels to a dimension where he witnesses two best friends battling enemies. He claims that one “was firing a gun and spinning himself around” while his best friend participated in “live commentary” as he held onto his shoulder.

This sounds very close to either the second or third entry in the Jak and Daxter series. Spinning around like a madman and supercharging weapons was something the player would constantly do when the combat was elevated for Jak II and Jak 3. Daxter was always famous for his commentary while Jak was protecting the two of them, even going as far as to shame a fallen Jak whenever it was game over.

Friends From Another World

The Jak and Daxter easter egg solely gives a shoutout to PlayStation’s other well-known platforming pair. Of course, the powerful RYNO 8 allows other beings from different dimensions to provide a hand in battle, yet they disappear within a second. One of these so happens to be Jak and Daxter, but they’re merely comprised of a pose before traveling back to their world. Still, it’s incredible to see all of these PlayStation properties make an appearance for Ratchet and Clank’s ultimate cross-dimensional mission.

Enjoying Ratchet and Clank: Rift Apart? Check out some of our guides here!