Sable Review | Hover-Biking Across The Desert 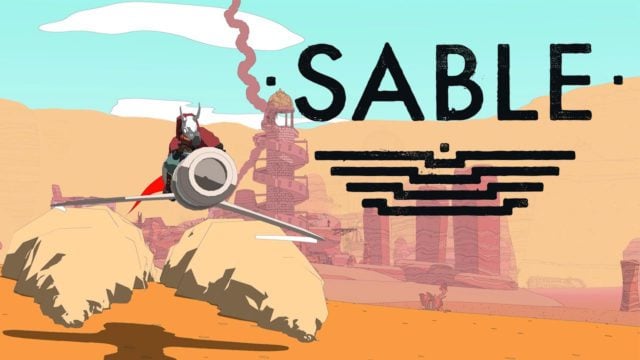 Deserts are interesting places. People tend to associate them with death and isolation, but the truth is that deserts hold their own form of life and light if you know where to look. It appears that Shedworks kept this in mind when creating Sable, since that’s what the game is based around. You play the titular character going on a coming-of-age journey across a vast desert broken up into several different regions. You’ll run, climb and ride your bike as you try to uncover the secrets of this world while collecting as many things as you can. Though, it can be difficult to keep sand from getting everywhere. 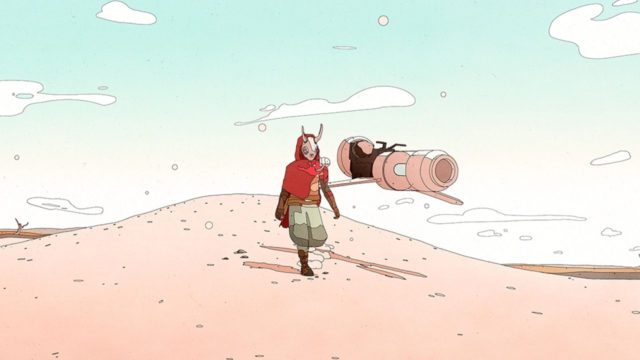 Like with the game Journey, the destination is the least important part of the voyage. This is evident in the story behind Sable. You play as Sable, a young girl from a small desert settlement. The game starts with her coming of age to go on a rite of passage known as ‘Gliding’. People expect her to go out into the desert and determine what kind of life she would like to lead. While exploring, she’ll encounter people from various professions who will give the tasks that will allow her to earn the mask of said profession. Her parental figure encourages her to go out and obtain as many masks as possible, and there’s plenty of freedom to do just that.

Feel The Wind In Your Hair 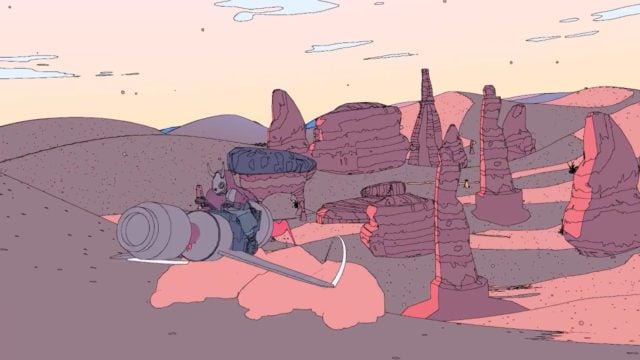 When you’ve got the open road and a trusty vehicle, there’s nothing quite like the sensation of driving at top speed with the wind blowing through you. Sable seems to be built around this feeling and tries to emphasize it. It does this well by giving you a huge desert with a lot of empty space to drive around. Since everything is so spaced out, you’ll spend a lot of time riding your hoverbike from place to place or simply just exploring. There are no giant creatures or other vehicles to get in your way unless they’ve already been crashed.

Then there’s the way it fuels curiosity. As mentioned previously, there’s a lot to see in this supposedly empty desert. There are small settlements and encampments littered throughout each region that you can visit. There are a ton of ominous spaceship wrecks to explore that can yield tons of goodies. It’s never really explained what happened in the pas, though you can find clues and piece together a history. There are also natural elements and strange formations to examine and gather goodies.

Although Sable already has a pretty relaxing atmosphere, all the pieces come together to strengthen it. There’s a lot of use of color and shading, which helps convey different moods and tones well. Throughout all this, you’re accompanied by a soothing soundtrack. 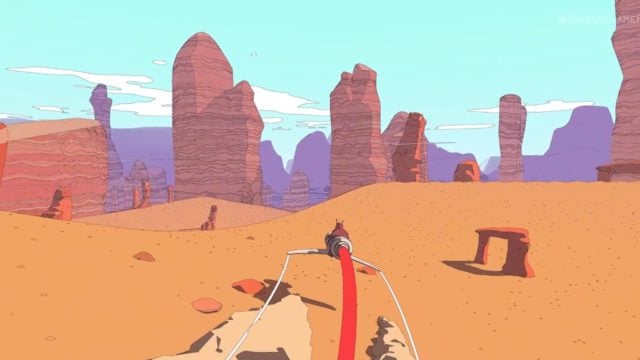 The main problem with traveling across beaches and deserts is that it’s virtually impossible to prevent sand from getting everywhere. Since Sable only gives you a hoverbike to get around, all that sand can be a big problem if it gets in the machinery. Unfortunately, it feels like the sand itself disrupts the smoothness of travel. The desert is surprisingly bumpy with lots of small objects that you can easily run over. While this normally wouldn’t be an issue for a hoverbike, here it can send you flying and spinning through the air like a NASCAR spectacle. There’s also a fair amount of slopes to navigate around, which will significantly drop your speed.

On that note, your bike is the most exciting aspect of your adventure, but it’s not fun right from the start. You begin with a nice but relatively slow bike with little to no acceleration that ultimately feels like rowing a paddle boat. This does keep you stable, but it feels tedious when you’re going on longer trips. Besides that, when there’s a whole desert to explore, it’s nice to have the option to speed through it. So, a big part of the game revolves around upgrading the bike, which can only be done at shops since wrecked ships are shockingly devoid of them.

Finally, there are a few technical issues to note. First, the animation can come off as very stiff and awkward — like a stop motion with half the frames missing. Second, there are clipping issues where items will mesh with the character. Third, it’s a common phenomenon to see NPCs walking in place against walls and objects. Last, there’s a chance that the NPC you’re looking for won’t appear unless you reset and reload. 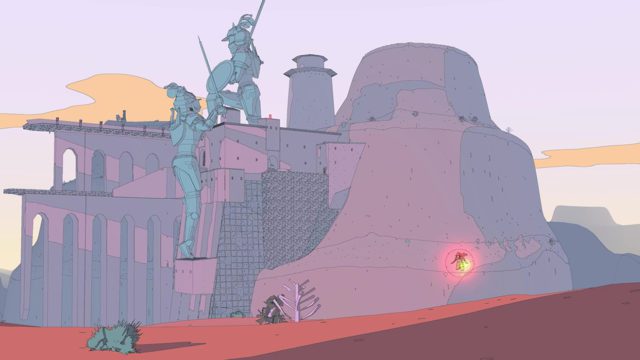 Sable is a third-person exploration game about riding a hoverbike through a huge desert and looking for adventure. It gives you plenty of room for relaxing rides, and there are enough activities floating around to keep you busy. Just don’t think you’ll be able to drop right in and blast around the desert, as early traversal can be a chore. The bike mechanics feel like they need some tightening, and the game itself has technical issues to clean up. Even so, it offers a nice journey that will hopefully get smoothed out a bit in future updates.

This review is based on a PC download code provided by the publisher. Sable is available on September 23, 2021 for Xbox One, Xbox Series X|S, macOS, and PC via Steam.