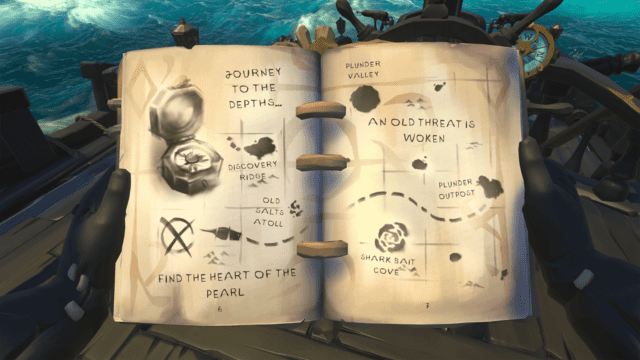 Sea of Thieves players both old and new have been digging their teeth into the newest expansion to the game, A Pirate’s Life. This team-up with Disney’s Pirates of the Caribbean franchise has led to a new series of Tall Tale quests being made available for players. In this guide we’re going to take a look at the second of these, and explain how to complete The Sunken Pearl.

How to Complete The Sunken Pearl Tall Tale 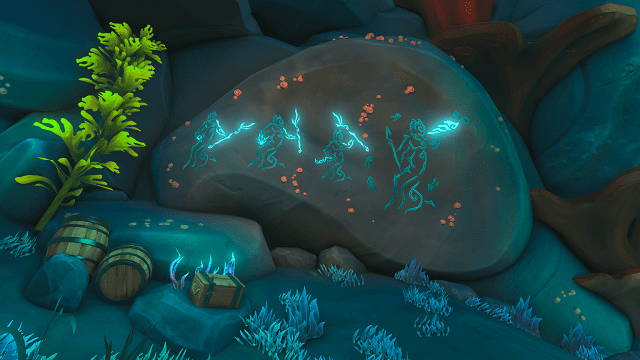 The Sunken Pearl is the second Tall Tale you’ll play as part of the expansion. This quest will require you to find Jack Sparrow’s compass somewhere inside the the Sunken Kingdom. This will require you to make your way to the Black Pearl, solving a puzzle and learning the underwater breathing mechanic as you go.

You can find the mission location in the southwest part of the map. It will be north of Shark Bait Cove, and Southwest of Old Salt’s Atoll. There’s also a giant blue beacon of light you can follow as well.

Once you’ve reached the area, dive under the water to follow the trail of debris. On your way you can pick up air bubbles from the debris to keep your breath up. Follow this path and you should find the Black Pearl.

After you find the ship, you’ll need to get to the lower decks. The main entrance will be blocked off, but there’s another way to get in from the bow of the ship, or the front end for you non-nautical types. While you’re there, you will find air bubbles near the grate for you to use.

Make your way through the ship, moving debris as you go. After a bit you’ll find a strange glowing creature, but it’s passive. Approach it and you can take the Black Pearl Key from the creature.

Following this, make your way out of the ship and head towards the captain’s cabin. The key you picked up will now be able to unlock it. On the table in the room you’ll see the compass. You need to pick it up, but this won’t end the Sunken Pearl quest.

For fans of the movies, you may remember that the compass points to your heart’s desire. So that means you want to equip the compass and follow where it leads you. In this instance, it leads you to a cave east-by-southeast of the Black Pearl.

Entering the tunnel, you’ll come across a barrier and a mermaid statue. To get past the barrier, you simply need to strike a glowing plant above it with your weapon. The statue will let you return to your ship or a saved checkpoint. Move past the barrier and you’ll enter the Siren’s Citadel, which is much less scary than it sounds.

A scary voice will provide a monologue before sending some of the glowing creatures from earlier to attack you. Once you beat the last of them, you’ll pick up an item called The Siren’s Heart. You’ll approach one of the smaller Siren statues in the area and insert the item when the prompt comes up.

For the other statues, you’ll need to modify the position they hold their trident in. To do this, you simply need to strike the statue. The correct positions can be found on a glowing piece of wall art, and they go as such:

Once this is done, hit the Statue with the heart one more time, and the water level should start to rise. Make your way upwards and you’ll sit through another monologue. After Mrs. Siren Queen gets through her spiel, you can start the boss fight against the Kraken. You can make use of the cannons of the nearby ship part to help you win this fight.

After the giant squid monster’s been taken down, you can move on to the last part of the quest. Make your way through the cavern, sit trough one last monologue, and then face down the Siren Queen. You’ll be fighting her underwater, so keep an eye out for air bubbles.

After you’ve defeated her, you’ll once again make your way through the caverns. You should come upon three glowing statues near the end of the cave. Attack these until they break, and you’ll reveal the survivors of the Black Pearl’s crew. Congratulations, you’ve completed the Sunken Pearl.

This Tall Tale is relatively simple to take care of, with the only real challenge outside of combat being the Siren statue puzzle. If you’re looking for some extra goodies, don’t forget to try to complete the commendations throughout the mission as well. Hopefully this guide made it all a little bit easier for you.

Looking for more Sea of Thieves?