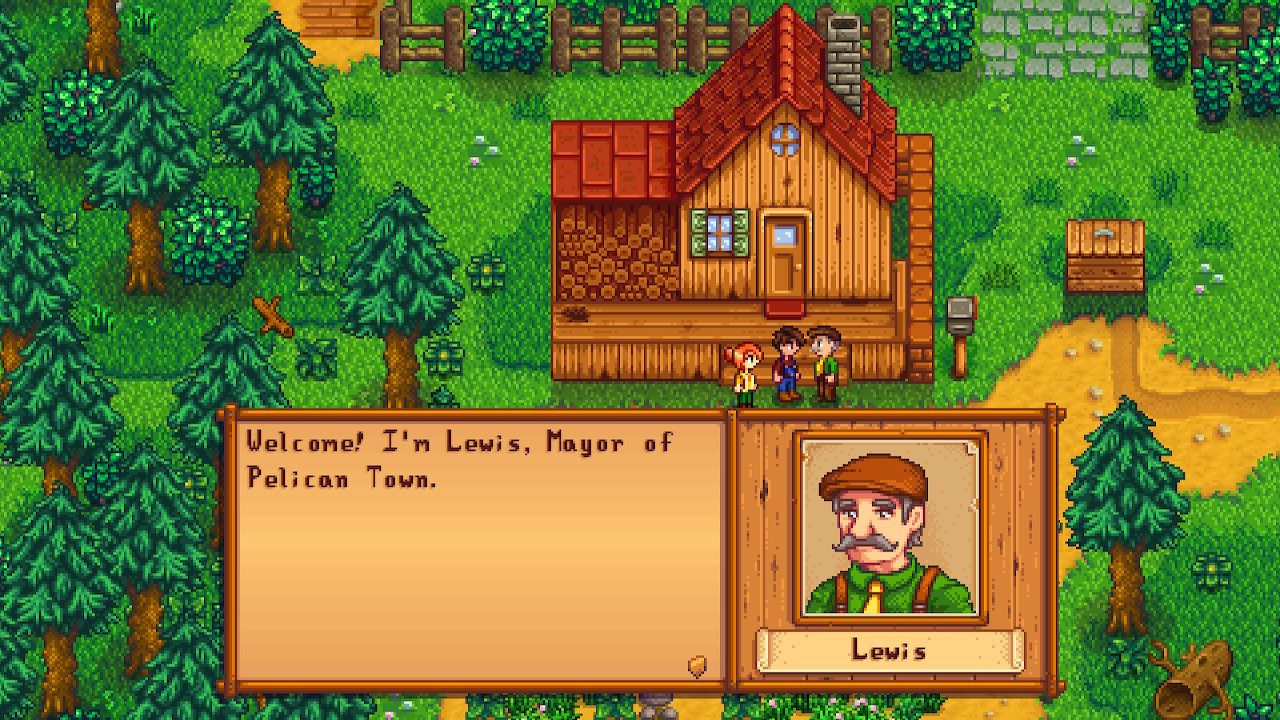 After stepping off the bus in Stardew Valley, you’ll be greeted by a snarky carpenter, who claims to be the mayor of your new home, Pelican Town. He’s kind enough to introduce himself as Lewis and helps you get acquainted with your new home and new neighbors. Not only is he one of the more prominent NPC in Pelican Town, but he is also a good friend to have. In this guide, we will run down his schedule, heart events, gifting preferences, and much more. 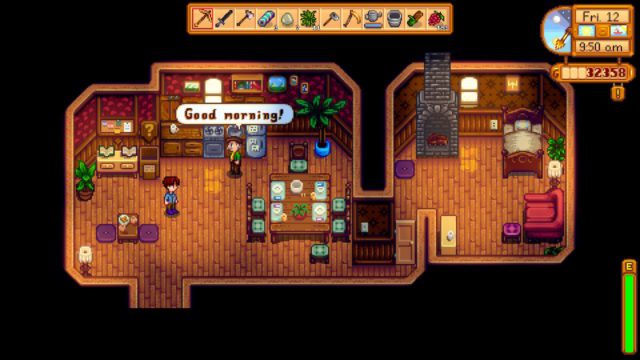 Lewis has been the Mayor of Pelican Town for over 20 years, running uncontested each election season. He’s a respected member of his community, beloved and trusted by all. He claims to be a bachelor, having never been married, but the word around town is that may not be as true as he says.

Lewis cares deeply about all his town’s residents and works hard to make sure Pelican Town businesses are running smoothly and that everyone has what they need to be happy. He’ll be the first to welcome you to Stardew Valley when you take over your grandfather’s farm.

Lewis is deeply connected with everyone in Pelican Town. He makes regular checkups to the local businesses to ensure they are doing well, and is a regular at The Stardrop Saloon, chatting with locals and socializing. He has a particularly close relationship with Marnie, a local farmer that sells animals and animal supplies. They’re often seen sitting together at a little table at the Stardrop Saloon on Friday nights. Makes one wonder if there’s something going on between the two of them…

Gifts | What Gifts Should I Give to Lewis?

All villagers have gifts that are Loves, Likes, Neutrals, Dislikes, and Hates. A loved gift will earn you 80 Friendship Points with your intended recipient, liked gifts earn 40, neutrals earn 20, dislikes cost -20, and hated gifts cost a painful -40 points. It’s important to be mindful of what your friends like and don’t like to avoid conflict. Luckily, Lewis isn’t nearly as choosy as some of the other villages, and there’s a great variety of good gifts for him.

Lewis is a sucker for lots of different cooked dishes and Hot Peppers. He’s pretty easy to find gifts for, you just have to know what to be on the lookout for.

Autumn’s Bounty is a cooked dish made with one Yam and one Pumpkin, the recipe for it can be obtained in a letter from Demetrius after reaching seven hearts of friendship with him. You won’t catch this recipe on The Queen of Sauce, so be sure to befriend Demetrius if you want to get your hands on it. You’ll also receive five Autumn’s Bounties as a reward for completing the Exotic Foraging Bundle in the Community Center. The dish may also pop up in Krobus’ shop on Saturdays or at The Stardrop Saloon.

Glazed Yams is a cooked dish as well, made with one Yam and one Sugar. (The man loves Yams!) The recipe can be obtained by viewing The Queen of Sauce on Fall 21 of Year 1. The dish itself, like many others, may also pop up in Krobus’ shop on Saturdays or at The Stardrop Saloon.

Green Tea can be made from Tea Leaves using a Keg. The leaves are harvested from Tea Bushes during the last week of Spring, Summer, and Fall. Tea Saplings can be crafted from two Wild Seeds, five Fiber, and five Wood after obtaining the recipe from Caroline the day after her 2-Heart Event. Tea Leaves placed into a keg will take three in-game hours to brew into Green Tea.

Hot Peppers are a crop grown during Summer. Seeds can be purchased from Pierre’s shop at any time during Summer, and they’ll take five days to grow. Hot Pepper plants give one Hot Pepper every three days, with a small chance of producing extra Hot Peppers.

Vegetable Medley is yet another cooked dish Lewis loves. This one can be made with one Tomato and one Beet, once you receive the recipe after reaching sevent hearts of friendship with Caroline. The dish itself can also be found on occasion at Krobus’ shop on Saturdays or in The Stardrop Saloon’s rotating stock.

Mayor Lewis’s liked gifts include Blueberries, Cactus Fruits, and Coconuts. The latter two can be obtained from foraging in Calico Desert, and Blueberries can be grown on your farm during Summer. Lewis also conforms to the list of Universal Likes, which includes the following:

The list of gifts about which Lewis is neutral is quite extensive, but they’re important to note, as they include quite a few gifts that other villagers may like or love.

These will be important to remember. Lewis dislikes all Universal Dislikes with no exceptions, meaning that this list can be applied to virtually all Pelican Town residents with some exceptions.

Perhaps the most important of all the items are the items that Lewis hates. These will cost you friendship points, so it’s important that you do not give the Mayor any of the following items:

There are two factors that will affect the effect your gift has on the recipient: Special occasions and quality. If the gift you’re giving is one that can be assigned a quality, i.e. silver, gold, or iridium, this quality will boost the effect of the gift, whether positive or negative. It multiplies as follows:

As an example, if you’re giving Lewis iridium quality Holly, which he hates, it will cost you -60 friendship points instead of the usual -40. Doing so on the Festival of the Winter Star will cost you a painful -300 points. This can be used to your advantage, however. Give Lewis an iridium quality Hot Pepper on his birthday for a whopping 960 friendship points, nearly four hearts for a single gift.

What Should I Get Lewis for His Birthday?

Lewis’s birthday is on Spring 7, and is the first birthday you’ll encounter in your playthrough of Stardew Valley. You’ll only be a week into your file, which isn’t going to give you a lot of resources to find Lewis something he’ll like or very much time to do it. Virtually all of Lewis’s loved gifts are out of the question this early in the game, unless you get insanely lucky.

Your best bet for a birthday gift Lewis in Year 1 is a Parsnip. It grows in only four days, the seeds are exceedingly cheap at just 20g a pop, and it’s a Vegetable, which is a Liked gift for Lewis. Not to mention, Lewis himself will gift you 15 Parsnip seeds at the beginning of the game for FREE! Almost like he’s dropping hints…

Schedule | Where is Lewis? 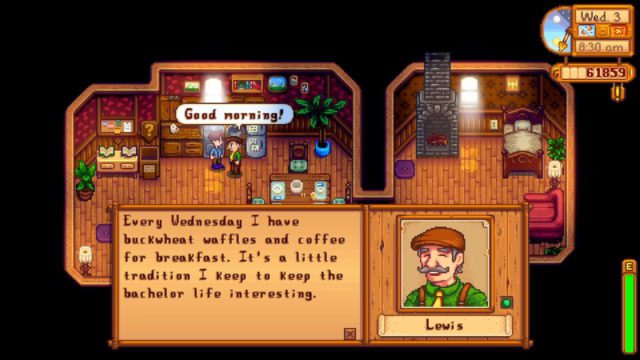 Lewis’ schedule is a little unusual; where most Pelican Town residents will stick to a routine that varies each day of the week, Lewis’ schedule will run on more of a monthly pattern. Lewis’s whereabouts are explained in detail below and are listed in order of priority. For example, though it may be the 6th of the month, if it is raining, Lewis’s “raining” schedule will override all other plans for the day.

All Seasons | Community Center Restored (except Tuesdays and Fridays)

All Seasons | Every 1st

All Seasons | Every 15th 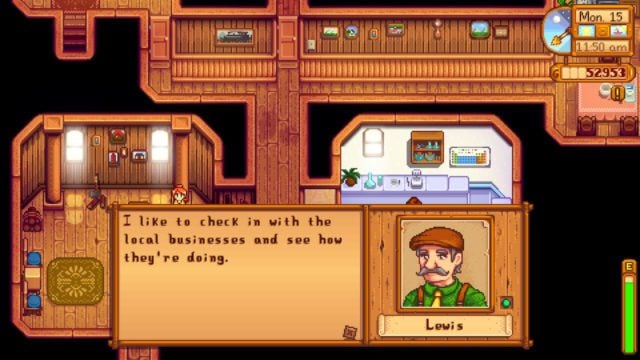 All Seasons | Every Day Except Tuesday and Friday

All Seasons | Every Tuesday

All Seasons | Every Friday

Heart Events are cutscenes that occur once you reach a certain number of hearts with a villager. Each villager has a different number of Heart Events, and in some cases, they may simply occur in the form of a letter containing a gift or recipe. Some events have certain requirements that must be met in order to complete the event, so let’s take a look at all of Lewis’s Heart Events to make sure you’ll be in the right place at the right time. 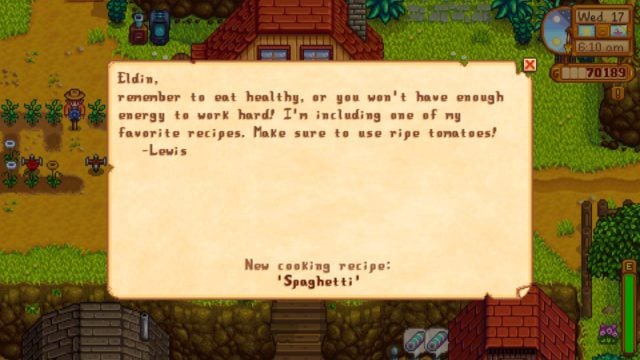 After reaching three hearts with Lewis, he’ll send you a recipe for Spaghetti in the mail, with the letter above attached.

This event will only take place if the player is also at six hearts with Marnie. If you do, enter town on a sunny day between 7:00 PM and 11:00 PM.

You’ll enter hidden behind Mayor’s Manor, eavesdropping on Lewis and Marnie. They’re standing by the river and are arguing; Marnie wants to make their romantic relationship public, but Lewis is worried that he’ll lose respect as Mayor from the rest of the town. Marnie begrudgingly says she’ll continue to keep the secret, and you step out from the shadows and startle them. Lewis will ask if you heard their conversation, and you’re presented with the following dialogue options: 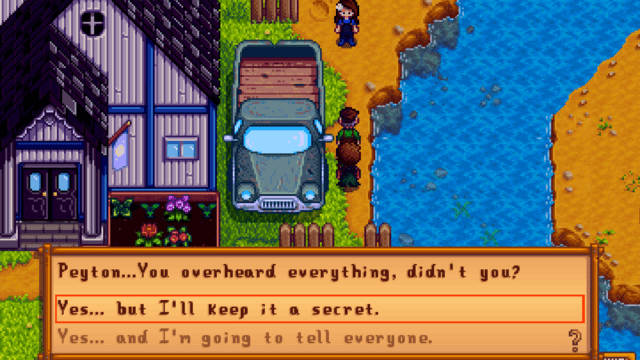 The first option, “Yes… but I’ll keep it a secret,” will gain you 50 friendship points with Lewis, while the latter will lose you 100 points. Neither choice will affect your friendship with Marnie. No matter your choice, Marnie will wonder why you were hiding behind the house in the first place, and you will run away. 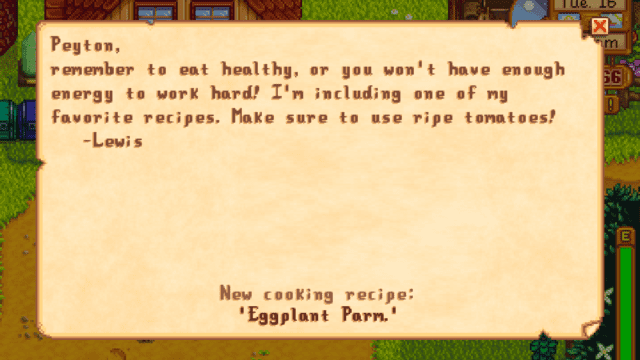 When you reach seven hearts of friendship with Lewis, he will send you a recipe for Eggplant Parmesan in the mail, along with the letter above attached. 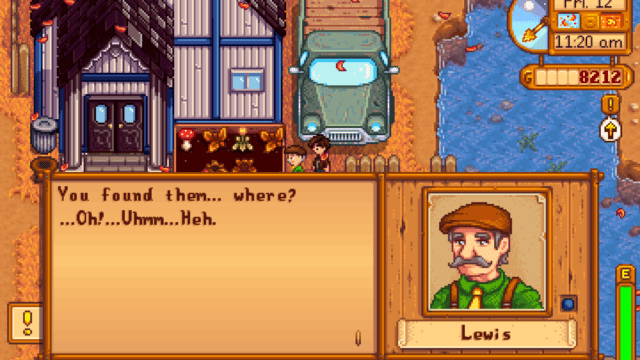 Lewis will send you a letter on Summer 3 of your first year with an embarrassing request; he’s lost his “lucky purple shorts,” and he needs you to find them discreetly. You’ll gain one Friendship heart and 750g for completing the quest. You’ll find the shorts in Marnie’s bedroom, but you’ll need two hearts of friendship with her to enter the room to retrieve them. If you need help, be sure to check our Mayor’s Shorts guide. 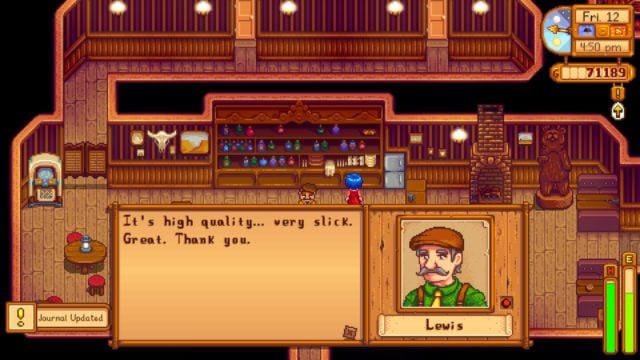 You’ll receive a letter on Summer 21 of your second year with a request from Lewis for a bottle of Truffle Oil. He tells you not to worry about what it’s used for. He’ll grant you 750g and one friendship heart if you fulfill the request. Truffle Oil can be made with an Oil Maker out of a Truffle harvested by a Pig, or occasionally purchased from the Traveling Cart, though the price will be much higher than the reward you’ll be given for completing the quest. 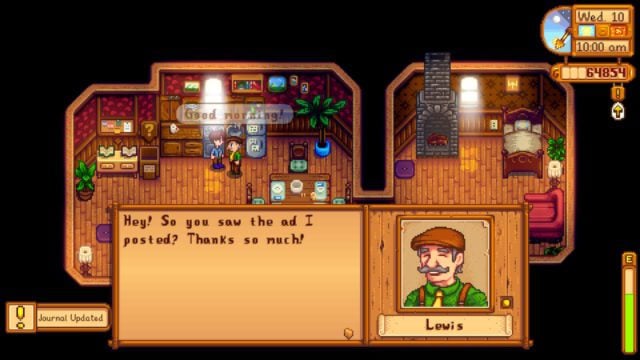 Lewis may randomly request that you vanquish a certain type of monster in the mines, or that you bring him a particular item. Once you’ve killed the monsters or found the item, talk to Lewis directly to complete the request and claim the reward. The reward for monsters will be an amount of gold that corresponds to the difficulty of the monster, and the reward for an item will be three times the item’s worth. Both options will also earn you one friendship heart.

As you can see, Lewis is a very prominent character in Stardew Valley and one that you will run into time and time again. Hopefully this guide has given you a better idea of who he is, where to find him, how to increase your friendship with him, and much more. While you’re here, be sure to check out our Sam character guide as well!

Peyton B Carper is a lifelong video game enthusiast and recent college grad, holding a Bachelor of Arts in Editing, Writing, and Media. She has yet to find a practical use for this degree. She currently resides in Dallas, Texas and hopes to one day own many dogs and a functioning Phillips CD-i.