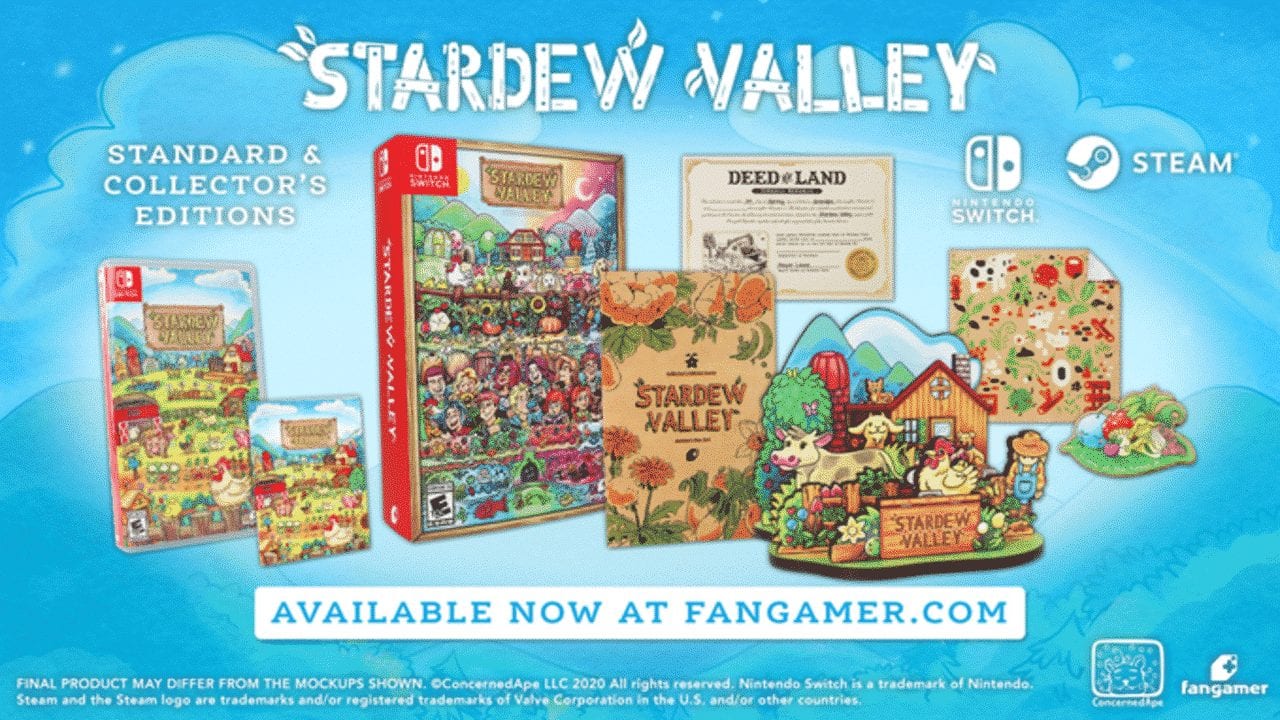 Stardew Valley is one of the biggest indie success stories of the past few years. Having sold over 10 million copies across all systems, the 8bit farming simulator has many fans. As such, the release of a special physical edition of Stardew Valley has been announced for both the Nintendo Switch and PC, the two bestselling platforms for the game.

There are two different versions of the physical release, a standard edition and a collector’s edition.
The standard edition is selling for $29 on PC and $34 on Nintendo Switch. This version of the game comes with a physical copy of the game, complete with a beautiful hand-drawn double-sided cover, with each side featuring a naturalistic farm theme on one side and a Joja Mart theme on the other.

You also receive an 18 paged full-color instruction manual, complete with illustrations which are often uncommon in modern game releases, giving players a little more than the ‘standard’ with the standard edition.  The collector’s edition is a little pricier, selling for $64 on PC and a hefty $69 for the Nintendo Switch. For that price, players get a lot of physical extras though, which may make the price worth it for more hardcore fans of Stardew Valley.

Along with the game and manual, the collector’s edition comes with a collector’s case featuring artwork drawn by Kari Fry. These illustrations feature all the game’s potential love interest along with many of the animals and environments from the game.

Buyers of this version of Stardew Valley physical release will also be given a cleaning cloth designed by Chihiro Sakaida, a replica of the deed for the farm given at the start of the game and a 14-page comic featuring a new story about the Junimos, which is again drawn by Chihiro Sakaida. Lastly, there is also a lapel pin and a beautiful standee display of the farm, both made from a blend of birch and cherry wood.

Something that is really nice to see in the collector’s edition is that all these physical extras are made from responsibly sourced and recyclable materials, which is true to Stardew Valleys’ themes of environmentalism and conservation.

If the collector’s edition is preordered before the August 15, a free 10 by 16-inch poster is included as well. Further, preorders for wither version of the game look to be available for a good long while as they won’t ship out until November 6. Fangamer also has a large collection of Stardew Valley t-shirts and pin badges on offer as well.