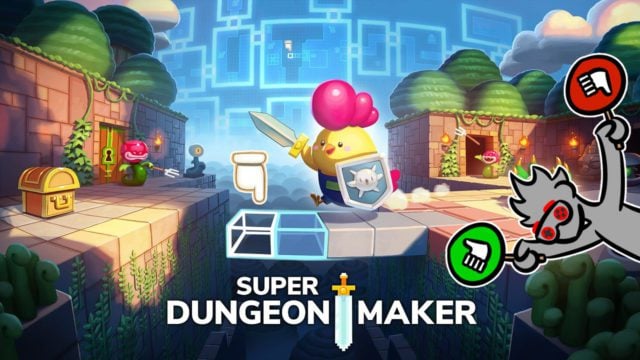 When it comes to crafting a game from the ground up, a lot of time and effort goes into building the world where it takes place. Environmental artists and level designers work around the clock to make memorable areas with creative layouts. However, there continues to be a rise in games that encourage user-made content, which give players a chance to flex their creativity. The developers at Firechick are offering their own tools in Super Dungeon Maker. With a protagonist who is a heroic chicken and a top-down pixel world at your disposal, this game aims to stimulate your inner designer while exercising your will to adventure. 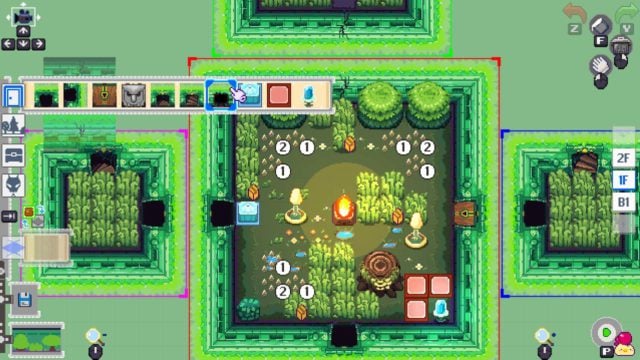 A problem with creating a world is that you also have to create a story that can unfold within. We’ve seen evidence of games like this having a story as sort of a backdrop like in the Little Big Planet and Super Mario Maker series. However, this isn’t the case with Super Dungeon Maker. You are a heroic chicken living in a village populated by other types of birds. There are some pre-made dungeons you can explore, but after the intro dungeon, you’re pretty much kicked right into the crafting table. Familiarize yourselves with the controls, play with the editor, explore some other player dungeons, and make your own story.

The Right Tools For The Job 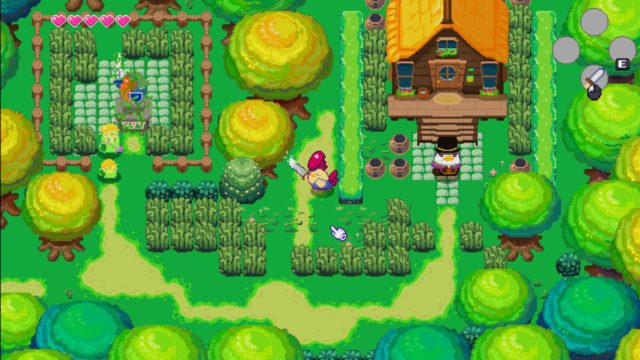 Whenever you decide to make something, you need to do the proper preparation and make sure you pick the right equipment so you can do the job well. Firebird has definitely picked up a quality toolbox to put together Super Dungeon Maker. One of them has taken the form of its visual design. It presents a very colorful pixelated world with a friendly and accessible atmosphere. This promotes the idea of having fun both in playing and in making. All the assets are clear and they fit together neatly.

The big thing that needs to work is how the dungeon editor appears. Once you get access to the overworld, you can go to the sandbox to literally use it for its namesake. It’s a simple but sizeable world that allows you to play around with all the different rooms and layouts as you learn more about the editor. The UI for the editor is very clean and easy to understand with all the different environmental and gameplay assets in a clear display. Placing the assets is quick and simple so you can make a mess or a complex puzzle within minutes.

Finally, the controls that you have to work with are complex enough for the job. You can get a feel for the limitations of the character and how they respond to their surroundings. Even though there isn’t a lot to master, this makes it easier to present a dungeon that challenges players to show off their mastery of the gameplay. 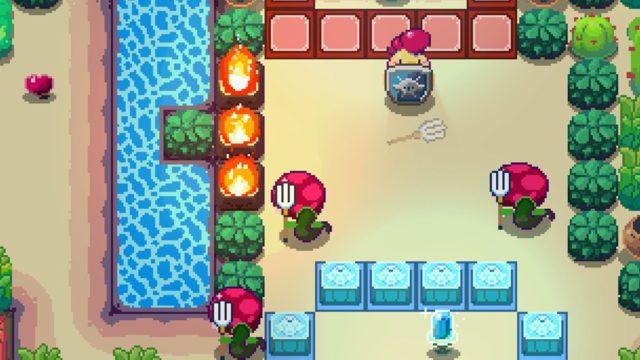 Even when you’ve been building something for years, it’s possible to forget things, especially if they’re small and unnoticeable. The problem in Super Dungeon Maker is that they are noticeable in terms of the game. The overall feel of the gameplay is slow. While this is fine for the dungeon-making side of things, it’s bothersome for the adventuring side. The chicken moves very slow, attacks very slow, and also has a pretty large hit box. With these things causing issues, it becomes difficult to create rooms that accommodate this without feeling too easy or too hard.

Then there’s the variety of the assets. There is quite a lot to play around with, but most of it is limited to decoration. You can fill your dungeons with tons of stuff that will do nothing more than slow them down slightly. There aren’t many enemy types to play around with or bosses to finish out your dungeon in style. In terms of items, there are only so many, and they have pretty serious limits to their uses. It’s possible to come up with creative arrangements using what you have, but a simpler look allows for room to include so much more.

Then there are the crashes. At any given time when I paused, there was a chance that the game would completely crash my system. This is extremely surprising and frustrating considering how small the game is, but it’s something that you’ll may want to expect. 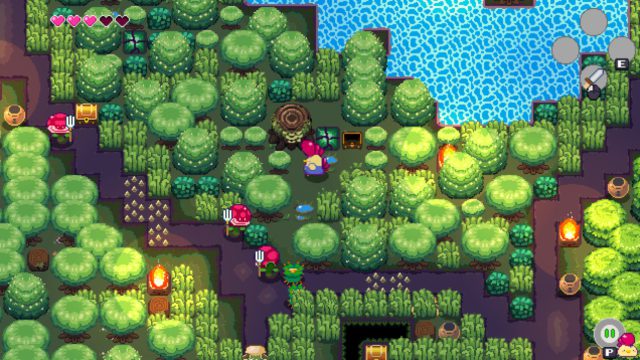 Super Dungeon Maker is a level-editor set against the backdrop of a top-down RPG with a chicken hero. It comes with a colorful presentation, easy and quick to use creator UI, and solid controls to master. At the moment, it’s a bit lacking in variety, speed, and some much-needed technical testing. It is still in Early Access, however, so there’s plenty of time to make something more of this maker.

This Early Access review is based on a digital download code provided by the publisher. Super Dungeon Maker is available now through Early Access via Steam.