There are two types of properties in this world: Those that don’t need sequels and those that do need sequels. Games can go either way, so long as the next in the series builds and expands the formula. The best sequels are the ones that have intent behind them, and a sequel that takes longer than five years to release better be good. Is that the case for Team Meat’s long-awaited Super Meat Boy Forever? Can the Super Meat Boy sequel continue the tradition of tight platforming despite the auto-runner design? In a word, no. 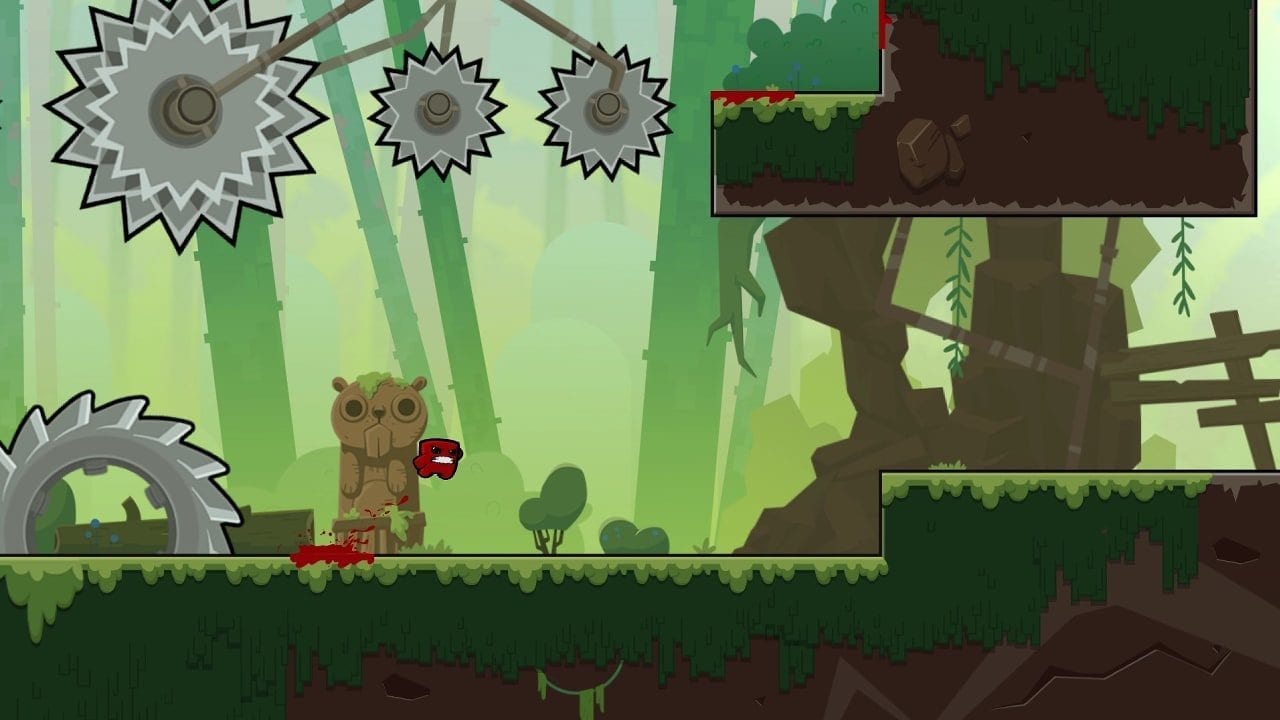 Ever since the flash version of Meat Boy, it’s been clear that the series was never about hard-hitting or complex drama. The previous games have a simple plot where an evil villain kidnaps a love interest, so you save her. Of course, seeing as Super Meat Boy is now a decade old, the latest game expands on the lore slightly. The two heroes, Meat Boy and Bandage Girl, live together in peace raising their child Nugget. Dr. Fetus sees how happy they are, becoming evermore angry and evil. He tracks them down and kidnaps Nugget, prompting the parents to go on a quest to save her. It seems Fetus’ plan is simply to lay as many obstacles in their way in hopes they’ll die along the journey. Saving your kid from the bad guy is more than enough motivation.

Team Meat knows how to make a good game. The developers are responsible for incredible titles like the previous Meat Boy as well as The Binding of Isaac series. As a result, Forever has a number of tasty bits. The tastiest of these is the level of animation in the cutscenes. While the previous games have cutscenes that are short and choppy, they fit the game and are quite humorous. With the latest installment, the improvements to animation are significant. Each one actually feels like it’s a clip from a legitimate cartoon show while keeping the signature comedic edge. There’s also a level of drama and emotion, including some pretty heartfelt moments.

If the developer’s previous games confirm anything else, it’s that the team is also good at making solid controls. Forever is no different, with controls and gameplay being overall quite tight. Of course, the hero now runs across the screen automatically, requiring precise inputs of jumps, wall-jumps, punches, and slides. Considering how fast the game is, having instant controller feedback is essential to completing each level. They work well in tandem with the new game assets like movable walls and reversal gems. Since another key aspect of the game is timing, quick reactions and complementary controls make for a decent challenge.

Forever also has some tough boss fights. While bosses in Super Meat Boy were more or less unusual obstacle courses, the ones in Forever are genuine fights. Each one comes with a flashy intro and thematic arena. All of them are distinct with different tactics and presentation. They also get bigger and more ridiculous as you progress through the story which adds to the overall experience.

As stated previously, the Team Meat folks know their stuff. So it’s disappointing that some of the new changes don’t work out. Unfortunately, the most rotten gripe I have with Forever is that it’s an auto-runner. I know, I know. There’s nothing wrong with auto-run games, but this one doesn’t seem to do anything better than its now 10-year old predecessor. There’s less control when it comes to tricky environmental hazards, and even less time to work out how to get past them. Checkpoints between segments are meant to help, but they reduce any real sense of accomplishment. And all too often, collectibles are in tricky areas just before checkpoints. Miss one and you have to back out of the entire level to try to nab it again.

Speaking of running, the PC version seems to have some processing problems. There were multiple moments where I would fail a jump or be thrown off my groove by sudden and intense lag. This is a 2D platform game with auto-run and the amount of lagging issues is unacceptable. Stutter may be acceptable in large or slower-paced games, but in an auto-runner where half a second can ruin your flow, it is a plague. It’s most frequent in boss fights due to the punching and flash animations. What’s worse is that boss fights have no checkpoints, so a lag sucker-punch before landing the final blow is truly infuriating.

Then there’s the level of challenge which isn’t surprising for a Meat Boy game. The previous one was all about making sharp moves and jumps to reach the end. In Forever, there’s jumping, ducking, and dash/punching, but the combinations of these can be unforgiving. There is no room for mistakes or small corrections. This is probably why checkpoints are so frequent, since every jump needs perfect timing and near pixel-perfect placement. This game demands so much in terms of quick reactions that it soon starts to feel entirely like trial-and-error. After all, the hero will plunge to their doom with or without your input.

Finally, there’s the decision to include different characters. Previous releases offered characters with different controls and play styles, but here they seem to be purely aesthetic. There are also a lot of them to unlock, though it’s not always clear what it takes to earn a new one. I played as three different characters throughout my session, and aside from slight visual flourishes, they all controlled the same. Considering how difficult it is to unlock them, it’s sad that they’re not more useful or interesting. 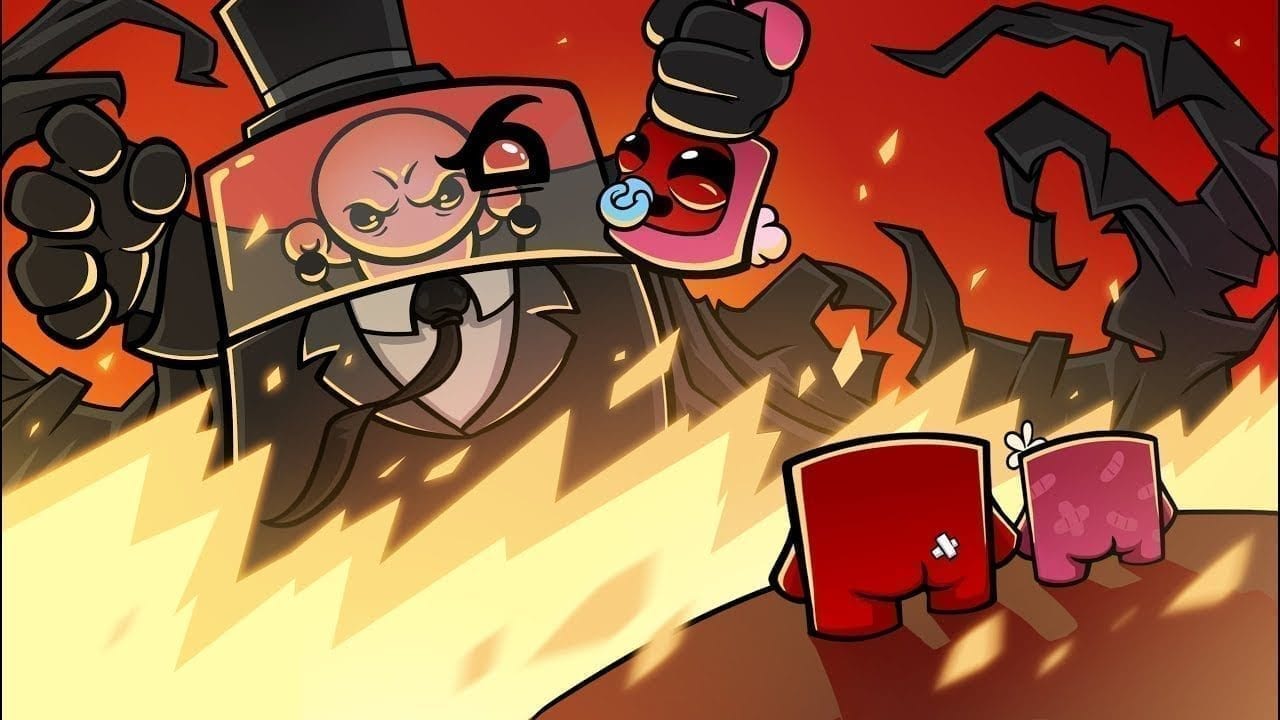 It took us ten years to finally get our hands on Super Meat Boy Forever, and honestly, it feels like we waited too long. It’s still a charming and challenging game, but the auto-runner foundation just doesn’t fit well into the Meat Boy recipe. Viewed as a standalone game, however, there are some high points. Forever has a solid presentation, responsive controls, and plenty of challenges. There are collectibles to find, and once the credits roll, you can shuffle the levels around and start all over again. Just don’t go into it expecting freedom of movement or intricate level design. For better or worse, those are problems you’ll have to face head-on.

This review is based on the PC version. Super Meat Boy Forever is available now on Nintendo Switch and PC via the Epic Games Store. For questions about our review, please see our review policy page.