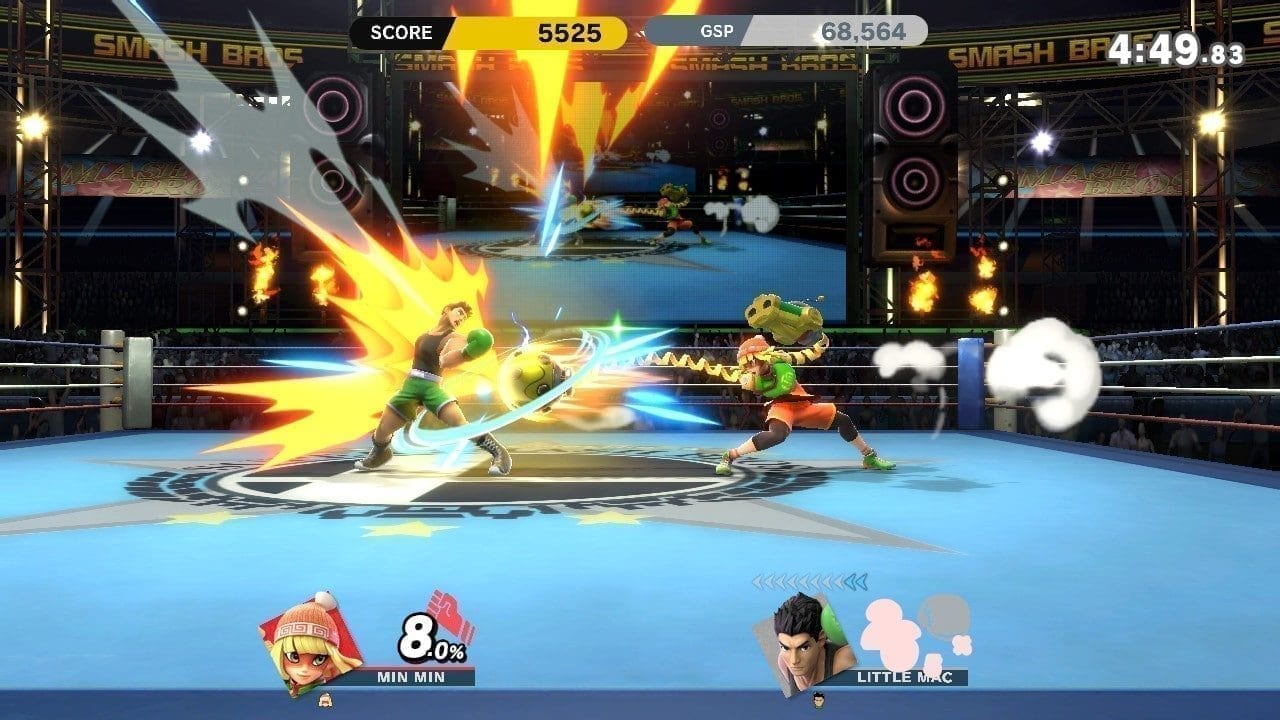 The reason I enjoy Classic mode so much is that each character’s run is made to reflect that character in some way, be it by mimicking their own game series in some way or as a homage to their reputation, each character’s history within the Super Smash Bros. series is represented. 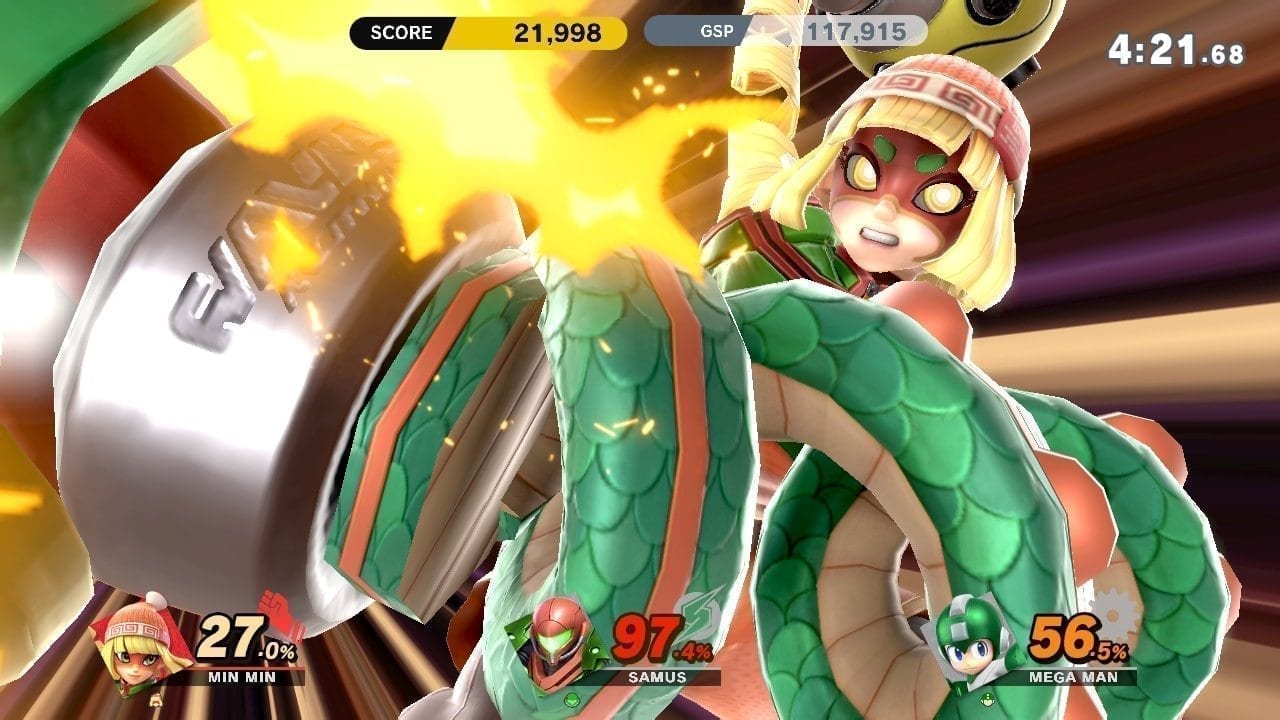 For example, Wolf, one of the many characters cut from Super Smash Bros. for Wii U/3DS, battle through all the other fighters who were cut out from previous Smash Brothers games, but returned in Ultimate as part of the ‘’everyone is here’’ gimmick (ex. Pichu and Solid Snake). The Ice Climbers take on a roster of famous duos such as Zelda and Link in their Classic mode is also quite fun, along with the Wii Fit trainer fights, who battle a series of overweight or lazy characters including Wario and King Dedede.

But what of Super Smash Bros. Ultimate Min Min Classic mode, which is part of the newest DLC? Well, I played through Min Min’s Classic mode roster to let you all know who she fights and what the inspiration for each of these individual fights entail.

Now for starters, Min Min’ Classic mode is titled ‘’ARMS at the Ready’’, a clear pun on the name of her original franchise. The name is also a good indicator as to what to expect in this run-through, as the theming for Min Min’s Classic mode run is fighters who use their fists or arms in combat. 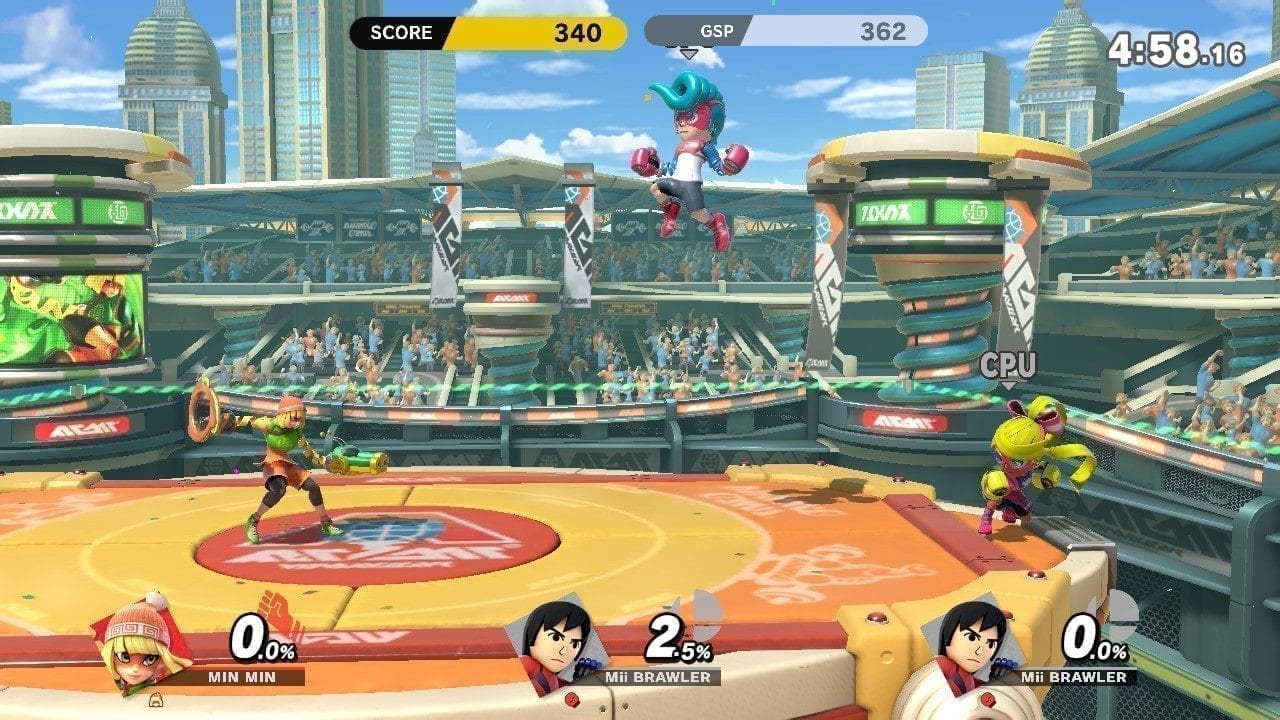 The first fight in the Super Smash Bros. Ultimate Min Min Classic mode is against two Mii Brawlers and these basic all-rounder brawler characters, making for an excellent warm-up fight. The fight is made a little more interesting with the Mii Brawler’s costumes, as both are donned in the clothes of one of Min Min’s fellow ARMS competitors — Spring Man and Ribbon Girl specifically. These getups, combined with Spring Stadium being the local for this fight, make the whole thing feel like a proper ARMS themed battle.

Following on from the Mii Brawlers is a fight against Little Mac, the mascot of another Nintendo fighting game series, Punch Out! Seeing the most iconic fighters from Nintendo’s oldest fighting game and it’s newest is a real treat, enhanced even further by it being fought in Punch Out’s own boxing ring.

The third fight is one against Samus and Megaman, both donning green alt skins. At first, this fight seemed a little strange to me, as both the legendary bounty hunter and the blue bomber are quite heavily reliant on their arm cannons. That’s when I realized, they use arm cannons, as in canons on their arms. Both projectile weapons are attached at the elbows, making them no different from Min Min’s own Dragon arms. This fight is happening on the Frigate Orpheon fight from Metroid, making this another home game for Min Min’s opponents.

Fight four takes place on the Kongo Falls map from Donkey Kong Country, and the obvious opponent to be duking it out on his home territory is DK himself. Another hand to hand combat-focused character, DK has been given his white alt skin and sized up for the fight, and is made up to resemble Master Mummy from ARMS.

Next up it’s back to Spring Stadium for a horde battle against half a dozen Rob the Robots, all colored in Min Min’s own color scheme. Though Rob has laser vision and other projectile weapons, the original toy for the NES could do little more than move his arms around — making him a perfect contender for this Super Smash Bros. Ultimate Min Min Classic mode run.

The final non-boss fight is a one-on-one battle with a second CPU controlled Min Min. While this is quite a rare occurrence within Classic mode, seeing four giant dragon fists launch across the screen at each other from springy noodle arms is a lot of fun and being able to fight the same character you’re playing as is a fighting game staple. 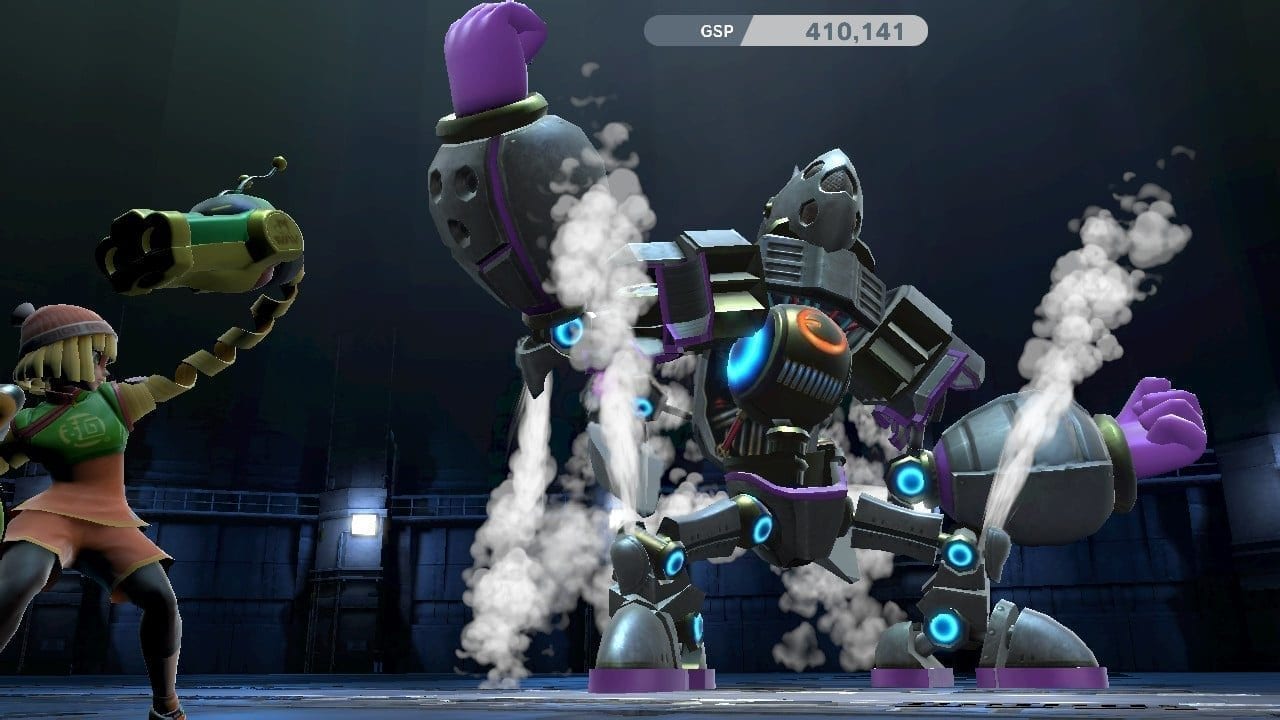 The boss battle, which caps off this run-through is Galleom, a Super Smash Bros. original boss like Master Hand. While Master Hand seemed the obvious choice to end an ARMS based campaign, the magnanimous detached appendage actually has quite a large array of laser and rocket-based attacks in its repertoire. However, a giant lumbering cyborg primate uses his large fists a fair amount in his mover set, making him a most suitable alternative.

Following this fight is the credits and then the rewards, which include an in-game victory picture and Min Min’s fighter spirit. I was pleasantly surprised by the theming of the Super Smash Bros. Ultimate Min Min Classic mode as I was half expecting all the fighters to simply represent other ARMS fighters, which is what the Spirit Board is for. Instead having her fight other hand-to-hand adversaries made for a unique and engaging series of battles.