Sword of the Necromancer Prologue Impressions | Dead and Back Again

When it comes to reviving folks, necromancers get a bad rap. They may use dark magic to bring someone back as monstrous creature, but alive is still alive, right? Well, that’s what the hero of Grimorio of Games’ upcoming title seems to think. In Sword of the Necromancer, the player guides a warrior to revive a loving companion by finding and using the game’s namesake forbidden magic. The game’s demo sets the stage for a rogue-lite experience with plenty of RNG and shifting dungeons. This genre is ripe for freshness and replayability, which the demo allows us to play around with.

Why We Seek the Sword

As mentioned previously, the protagonist’s quest is one brought about by love and grief. The roguish hero Tama was traveling with the innocent Koko when they both were struck by tragedy. With Koko gone, Tama blames herself, and so decides to chase the legend about a sword that can revive the dead. She brings Koko’s body into the dungeon and seeks to gather enough power to restore her life. The story is reminiscent of Shadow of the Colossus and Link’s Adventure, but proves effective enough to drive us forward.

Rogue-lite games revolve around exploration, so good movement is a must. Thankfully, Sword of the Necromancer has solid controls that make it easy to move around quickly. Tama is quite fast, so fleeing from strong enemies and retreating to regroup is always an option. The Dash mechanic is quick and direct, which allows for precise moves and evades. The various attacks also have distinct areas of effect, meaning it’s easy to gauge enemy distance and hitboxes.

The most important aspect of these types of games is how they handle RNG, or random number generation. When set in dungeons, this element usually affects room layouts, enemy encounters, and items found. Sword of the Necromancer scores a three-pointer with these and keeps every attempt different. Respawns are very fast, allowing players to quickly jump back into the action and resume their groove. The most randomized elements are the weapons, and dang are there a lot of them. They range from melee weapons like axes to magic weapons like grimoires, so the RNG caters to various play styles and strategies.

The sword’s mechanic is another star to play and learn about. By using its power, the sword of the necromancer can restore slain enemies to life. These enemies take up a slot in Tama’s inventory, and can be summoned or dismissed at will. With variety of enemies all with different stats and attacks, it almost feels like a crude (but still effective) version of Pokémon. As the demo appears to show, there doesn’t seem to be any limit to the monsters that can be revived (save for bosses), providing an entirely separate path to explore in terms of play and strategy.

I’d also like to briefly mention how smooth and gorgeous the opening animation is, so I did. 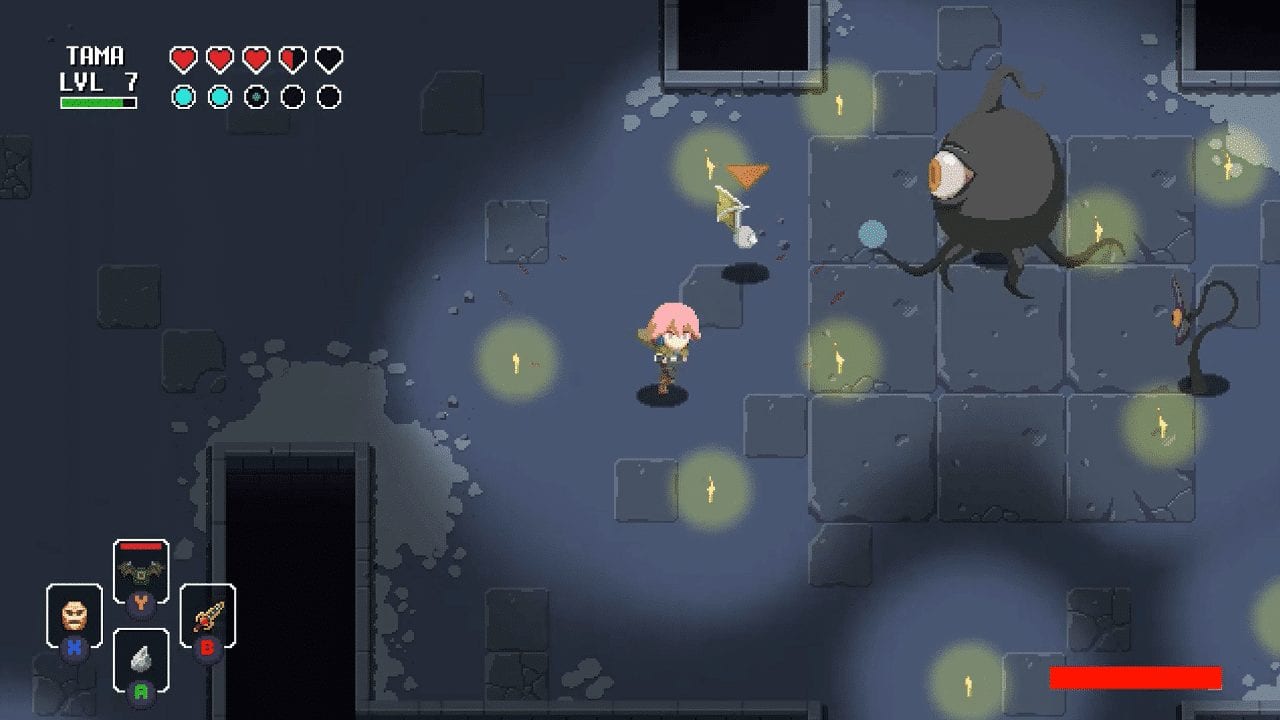 Every hero has a weakness, and most have more than one. As strong as Tama is, there are some things that hold her back, such as her stats. While the Dash is a good move, it’s limited by Tama’s stamina, which appears to only increase by leveling up. Since the game has an RPG feel, the notion of leveling up is not surprising, but the results don’t always feel significant. So, if you’re aiming for a particular improvement, you’ll need to grind enemies for EXP until you get what you want. This would feel a bit more rewarding if enemies had more to drop than simple experience.

As for the RNG, it feels like it’s lacking content. While each dungeon run is different, the rooms themselves all look very similar. Not every room has a treasure chest, and most of them can be ignored without giving the monsters the time of day. It’s very easy to make straight runs from the start to the boss, which is convenient if uninteresting. Since chests appear as icons on the map, there’s little reason to explore rooms that don’t have one. All you’re bound to find if you stick around are angry monsters and breakable objects.

Lastly, we arrive at overall aesthetic and control. The pixel art and animation is clean but stiff. Tama’s running animation in relation to the movement controls feels like she’s sliding around while moving in place. Also, some of the weapons are highly directional, making them tricky to use well in tense situations. Finally, it’s a shame that the opening animation has such good quality only to be replaced by blurry still images.

Where the Dungeon Leads… 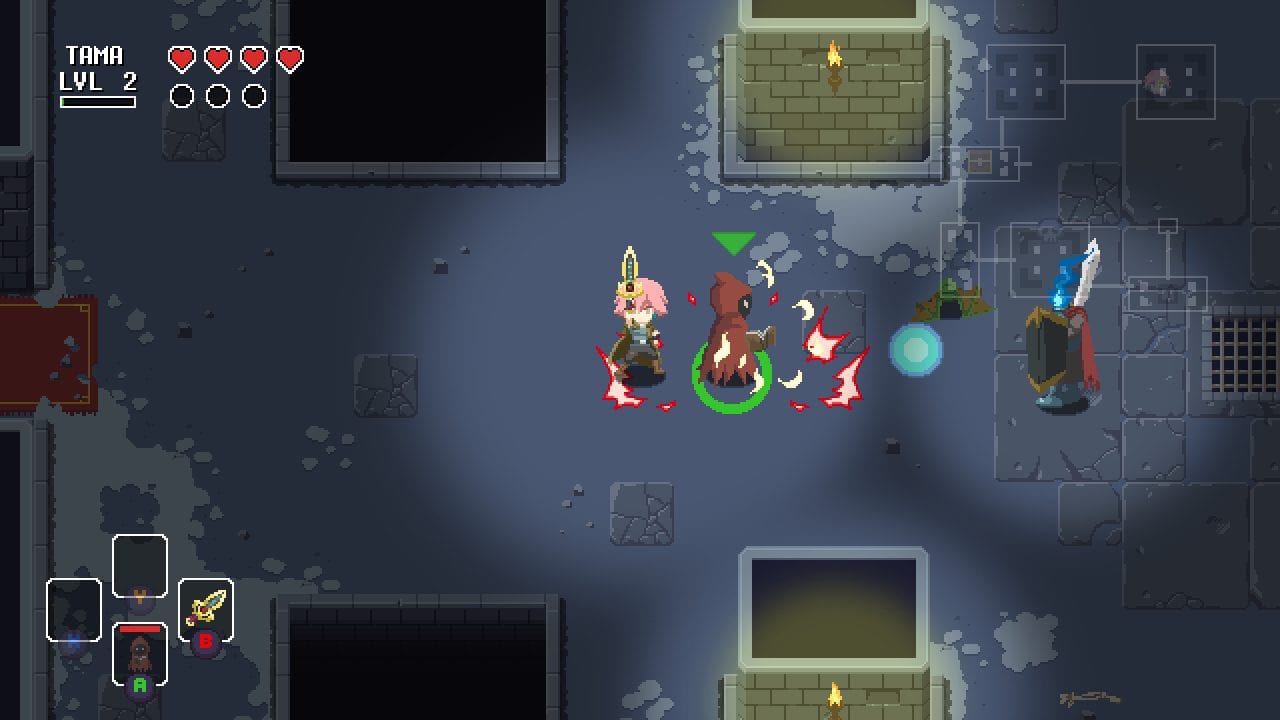 This dungeon leads to a complete structure below the surface with ground-breaking to come in January 2021. Rogue-lite games dominate replay value, and Sword of the Necromancer does its best to offer solid RNG. While everything does change, the developers could change even more and add more variety. The controls work, but have some loose points in need of tightening, and some nicer aesthetics wouldn’t hurt. Still, this is just a demo, and it’s the first room of the expansive dungeon to come. Let’s hope there’s plenty of loot in the next room.