Vampire Survivors Stages | How to Unlock All Maps & Modes 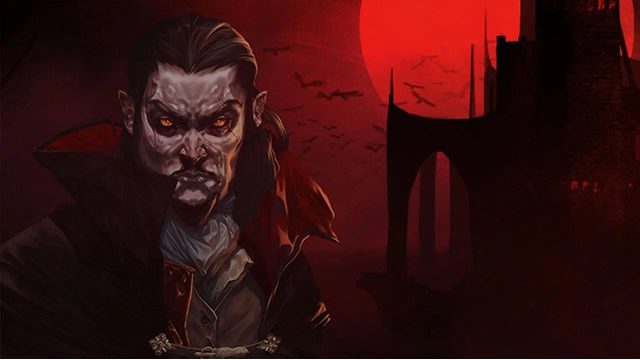 As Vampire Survivors goes from update to update, the game’s stage screen continues to grow in size. Each of these have very specific secrets and items to gather, making it important to know what you’re doing in each of them. Whether you’re a new player or an old one, these stages can still hide some insanely hard-to-find secrets in them! So, let’s walk through each so you know exactly what to look for in Vampire Survivors stages!

How To Unlock All Stages in Vampire Survivors

This guide to all stages in Vampire Survivors is updated to Patch 0.7.3, with the most recent stages being Cappella Magna and Moongolow. It will also answer any questions you have about the “Hyper” and “Hurry” options beneath the stage selection screen.

The Stage Items listed can be acquired at any point during gameplay. If picked up before you’ve filled up your Passive Slots, they will replace a Passive Slot. But if you wait until you have all six item slots filled, you’ll get bonus passives.

In addition, all stages currently have the hidden items needed to create the Infinite Corridor and Crimson Shroud. These are endgame items that require you to progress deep into Stage 5 and Moongolow in order to unlock. 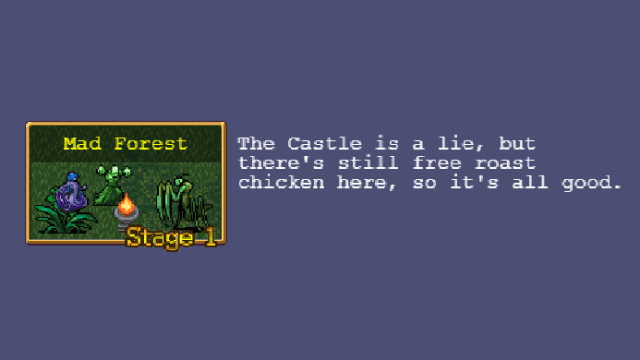 The Mad Forest stage is unlocked by default.

The first map is a relatively easy, standard stage. Within boxed foliage you’ll find Clovers, Spinach, Hollow Hearts, Pummarola, and Skull O’Maniacs. You’ll also be able to find the coffin of Pugnala Provola by exploring. Make sure you get the Map from Stage 3 before looking for her.

You can unlock Hyper Mode on this stage by defeating the 25 minute boss, a large woman in a flower. 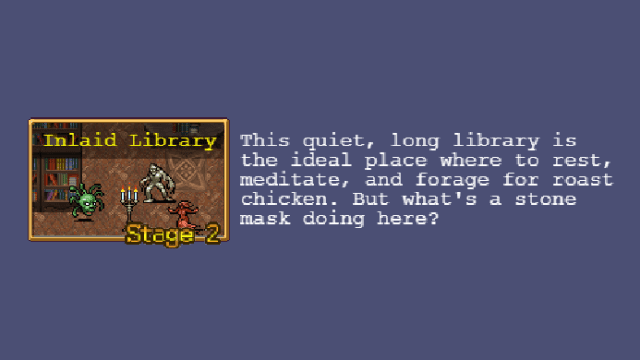 The Inlaid Library is unlocked by reaching level 20 in Mad Forest.

This is a horizontal stage, and is arguably one of the easier farming options for a stage in Vampire Survivors. That’s because you can only go left or right, and enemy waves are predictable. This stage has Empty Tomes on the left and a Stone Mask on the right. The Magic Banger (Song selection) and Grim Grimoire (Weapon evolution reminder guide) are also located to the left. Giovanna Grana is in a coffin to the right.

Defeating the 25 Minute boss, a vampire wizard, will get you Hyper Mode. 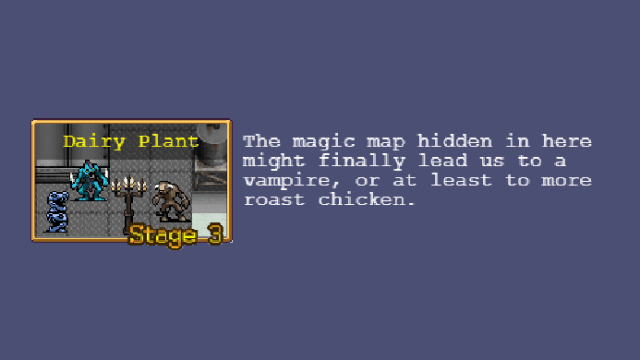 The Dairy Plant stage will unlock after reaching level 40 in the Inlaid Library.

A large, maze-like map that can be confusing to navigate. This map has Attractorbs, Candelabradors, Wings, and Armor scattered throughout its rather tricky layout. Thankfully, if you follow the green arrow, you’ll find the Milky Way Map, which will allow you to permanently see all maps for any stage in Vampire Survivors. This map will likely be to the bottom right. The coffin for this stage is Poppea Pecorina.

Defeat the 25 minute boss, a large golem, to get Hyper Mode. 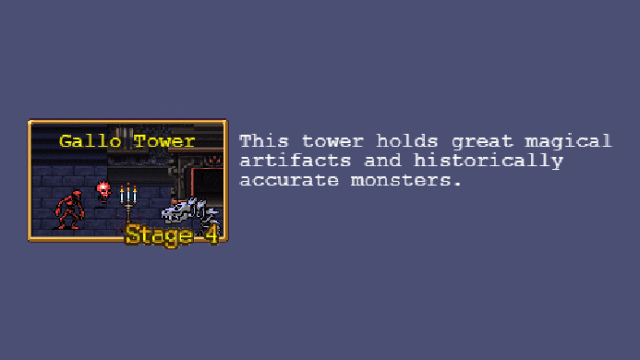 The Galo Tower becomes unlocked after reaching level 60 in the Dairy Plant.

This vertical map is great for bouncing weapons. You can find a Bracer to the north and Spellbinder to the south. The Sorceress’s Tears (Hurry Mode) are to the south, and the Randomazzo (Arcana Unlock) to the north. The coffin containing Concetta Caciotta is located to the north, and can be accessed by walking through the left-wall Mirror when you get to the same height as the ? on the map. You can also fight Leda, a secret boss, by heading to the bottom of the map.

The Giant Enemy Crab at 25 minutes is your target to unlock Hyper Mode. 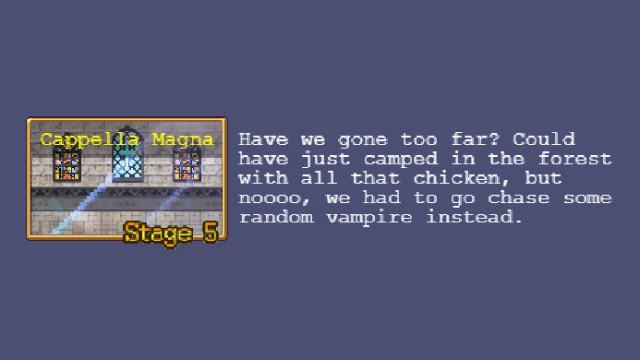 Capell Magna is unlocked by completing the Lunar Eclipse event in Moongolow.

A strange stage which requires clever use of Rosaries to avoid Stalkers, Drowners, and Trickster Deaths all around. You can collect Crowns, Tiragisú, and a Duplicator on this map. You’ll find the coffin for Zi’Assunta Belpaese.

You must defeat the strange face boss at 25 minutes to access this area.

This level is part of the Lunar Eclipse event. Your character only has its starting item. You must reach the end. Recommended for characters with great stats and starting equipment like Krocchi. This disappears once you complete it once. 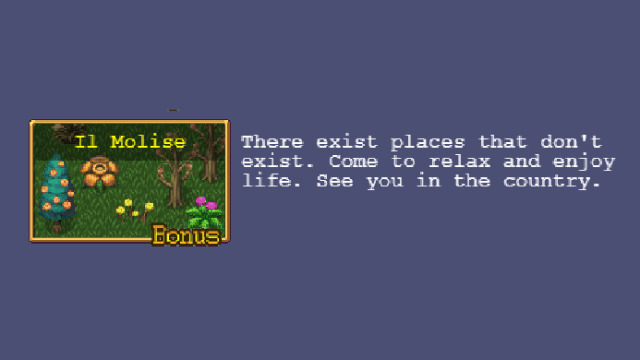 You unlock this map by getting the Hyper Mode for any other normal stage.

A very unique map where plants appear all around you. Surviving for 6 minutes after the 15 minute timer will net you a ton of gold… Which you deserve for dodging Red Death for that long! 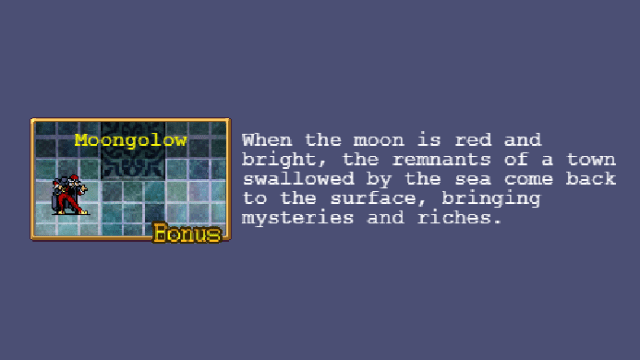 You unlock this map by getting Hyper Mode for stages 1-4.

This stage has a 15 minute time limit, but access to a ton of items. Once you reach 15 minutes the first time, you’ll be sent to the Holy Forbidden to complete the Lunar Eclipse event. You automatically unlock Hyper Mode on this stage, and it’s a great place to farm gold, since you’ll always have access to the Stone Mask right away. 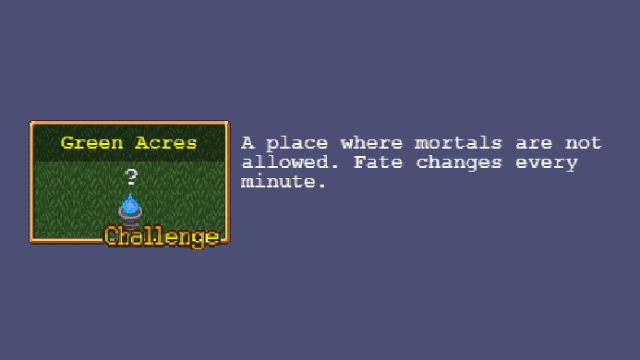 A challenging area unlocked by getting 2 Hyper Mode stages unlocked.

This map simply has random waves collected from all stages that you currently have unlocked. It’s basically a random game generator with very limited items. 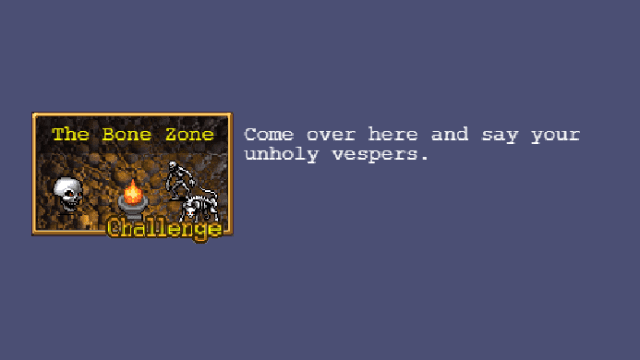 Unlocked once you have Hyper Mode for 3 of the normal stages.

This very challenging, and spooky, area gives a large amount of Gold, but enemies gain a ton of additional stats that make them hard to kill and exceptionally dangerous.

This is a boss gauntlet, and thus requires a lot of patience to complete. You can collect a powerful suite of items by using Mad Groove (VIII). You will also need to complete this stage with a single weapon to unlock the character Gyorunton.

What Are Hyper Levels in Vampire Survivors? 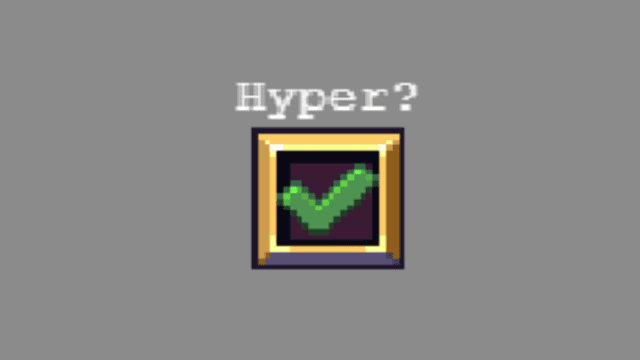 Hyper Levels increase your movement speed by 75%, give you a +50% Gold Bonus, and give you 10% luck. However, enemies also gain this massive movement speed bonus, making Hyper Levels much more difficult. However, Hyper Mode is sometimes required to access secrets, such as the Leda boss fight, as well as making it easier to get to stage items and coffins.

What Are Hurry Levels in Vampire Survivors? 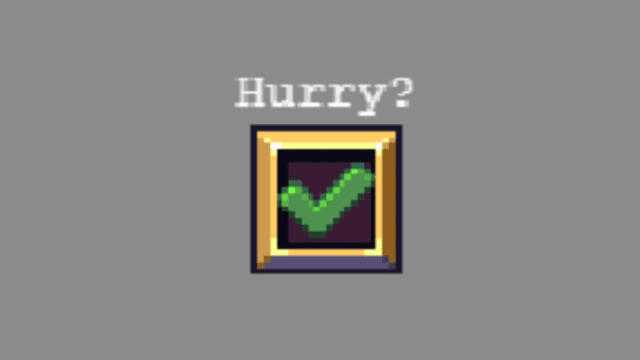 Hurry Mode in Vampire Survivors is unlocked by acquiring the Sorceress’s Tears in Gallo Tower. Very simply, the game’s clock is doubled. This means waves spawn every 30 seconds and bosses spawn much faster. So, these runs will always be significantly faster. However, it will almost always lead to the player being underleveled, as there is less time to farm experience. Be careful if you’re using this mode while grinding achievements, because it’ll always be more difficult.