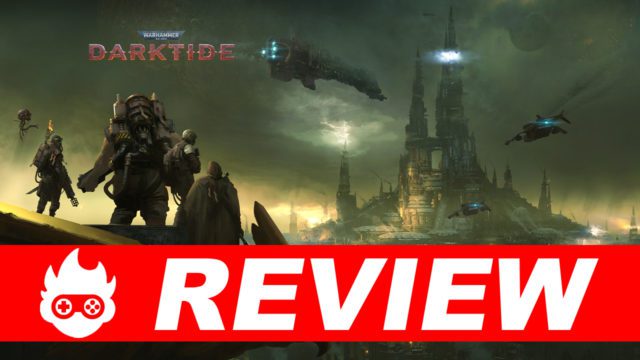 The Warhammer franchise is known for creating expansive fantasy and futuristic settings locked in perpetual warfare. The latter is referred to as Warhammer 40k, and its story is explored in the game Warhammer 40k: Darktide by Fat Shark. It puts you into the role of one of several warriors sent to accomplish missions across a plagued planet. It relies on online play and constantly refreshes the available missions as time goes on. The more you do, the more the story progresses so that you get to experience more of this dark universe while finding better ways to survive it.

What Is The Darktide? 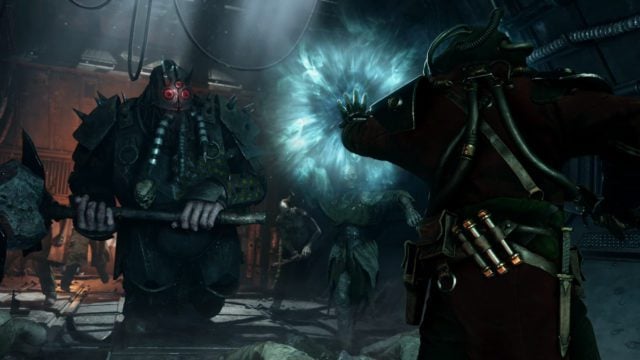 The Warhammer 40k universe is so vast that it would take ages to cover every story based on it. Luckily, the story of Darktide is pretty easy to cover while still offering a lot. In the far future, the strongest governing body known as the Imperium continues to wage war. One sect, in particular, focuses on the war efforts in Tertium, a world vital to the Imperium’s stability. Unfortunately, it has been taken over and consumed by an overwhelming force of rogues and mutants. What’s worse, these ne’er-do-wells are polluting the world with a toxic substance. Unwilling to risk official soldiers, the Imperium resorts to giving condemned criminals a second chance by going in their stead. As one of these conflicts, the future of Tertium depends on you and your fellow prisoners.

Surfing the Darktide Is Fast and Satisfying 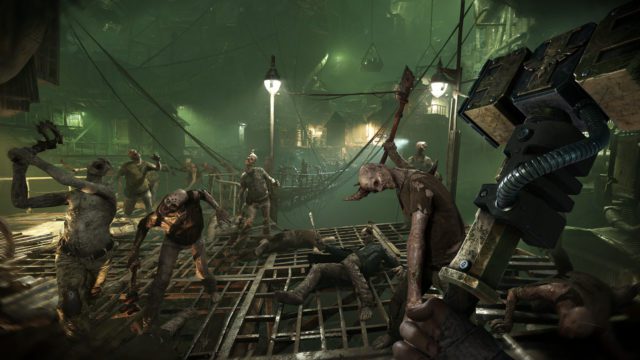 When a game promises action, it should focus on getting you right into it as quickly as possible. Although the lore of Warhammer 40k is rich and detailed, Darktide wastes no time in cutting straight to the point. After a decently thorough character-creation process, the prologue begins and you’re off. Barely even seconds pass before you’re caving in rabid humanoids with a shovel you found on the ground. You have the desire to survive while also a desire to fight off more of these fleshy bad guys. There’s some light guidance to direct you to the next part of the story, but the layout is easy enough to navigate. You won’t mind getting wandering off if it means fighting more enemies.

Then there’s the combat. There are four different classes to choose from covering the usual archetypes: Range, Melee, Special, and Tank. No matter which one you choose (except for maybe Range), you’re ready for battle. The game is tailored towards teamwork with bots and other players, but you’re given a fair amount of strength to hold your own if the occasion calls for it… which is a lot.

Primarily, you have a ranged and melee weapon to quickly swap between. There are also some utility items to help you out and ordinance to make things more explosive. The great thing is that you don’t ever need to depend on one method or the other. If you want to focus on being a sharpshooter or just charging in swinging wildly, the game allows for both. Just try not to get too overzealous or you’ll be going down more often than an underground elevator.

The Importance of Teamwork

Then, there’s the team-based aspect. There are many multiplayer FPS games that need precision and sharp communication in order to achieve success, but it isn’t necessary here. Being able to talk and coordinate with teammates is a bonus since the game has a decent balance. It’s up to you to discern your own limits and pick the missions you feel most prepared for. That way you can effectively contribute to the team’s efforts. The matchmaking works well enough keep things feeling balanced. Each mission provides plenty of opportunities to shine whether it’s using utilities and grenades well or fighting hordes alongside your teammates. The game supports both the team and individual experience while not being overly competitive.

Finally, as the cherry on the grimdark sundae, the whole game captures the source content accurately. Warhammer 40k has always been built on tabletop gaming with tremendously detailed models. Happily, this game does it justice. All the characters look and feel like people living in endless warfare. You roam through the missions and hub area getting the sense that there’s always danger around the corner. Even with this dark setting, you can see everything clearly which allows you to enjoy and appreciate it more. 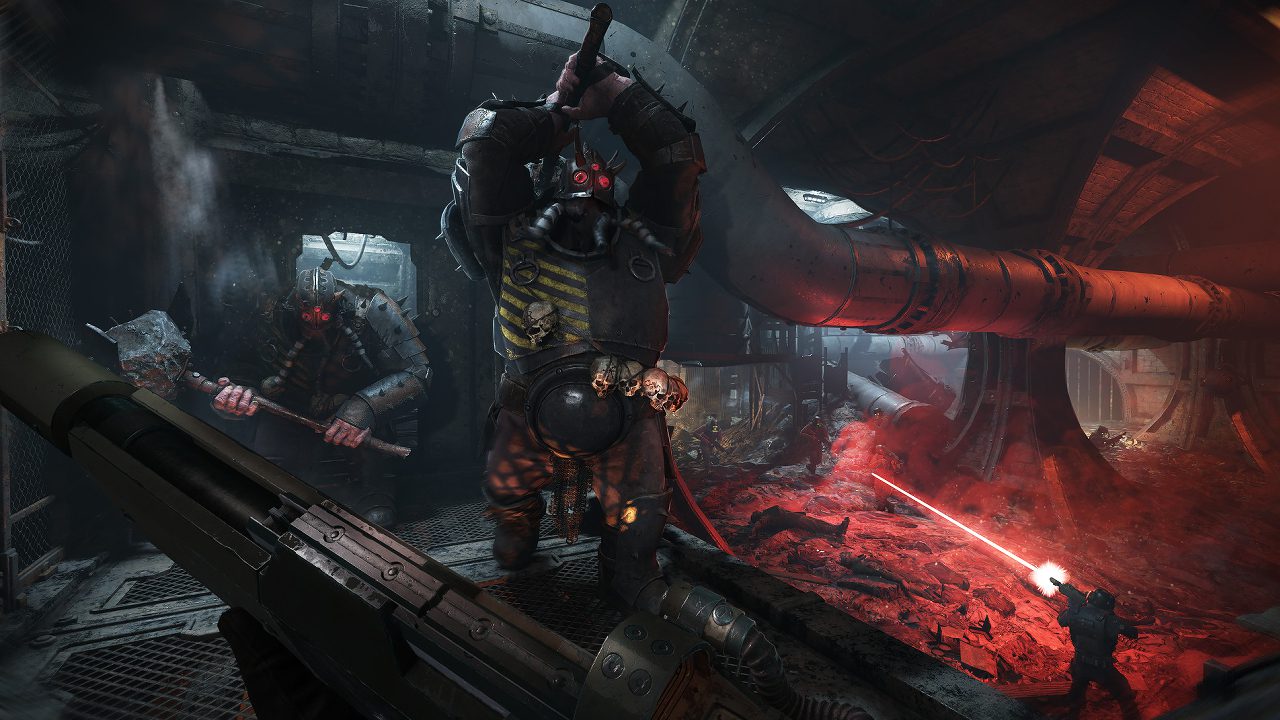 It’s clear that a lot of effort was put into this game. Still, there are some things that hold Darktide back from being more. The most obvious and yet one that you can’t avoid is an online necessity. It’s possible to play only with bots, but that’s not ideal. Not only do they not always behave how you hope but they can be annoyingly incompetent. Should you manage to match with other players, there’s always the risk of lag even though matchmaking tries to match connection speeds as best as it can. So, make sure you invest in a strong network and connection. Otherwise you’ll be in for additional lag and processing problems.

Then there’s the somewhat unavoidable “first come, first serve” mentality. Though you can change the loadout if you have enough items or resources, you’re mostly dependent on what the mission locations give you. If you’re unable or unwilling to communicate with teammates directly, you may find yourselves fighting for ammo and health drops as you progress. Sometimes they can be few and far between so you have to limit yourself to smacking things around if you aren’t first to the ammo trough.

Then, there’s the grinding and microtransaction aspect. While for the time being the game doesn’t deliberately block your progress, you’ll need to play a lot to expand your inventory. Missions provide only so many resources and experience. Be prepared to dedicate a lot of time just so that you’ll have more to experiment with. That is, unless you’re willing to pay. The microtransactions are currently very demanding and create an imbalance that takes a lot away from the immersion. One can only hope the developers will improve this soon.

Warhammer 40k: Darktide places online FPS action within the Warhammer 40k universe. It has a lot to offer in terms of individual and team-based play while giving a solid representation of the source material and going hard and fast on the action. It still needs to compensate those who would rather play offline and don’t want to keep fighting over consumables as they try to avoid getting angry over a large number of microtransactions. Still, it can be quite exciting to head down to the shore for when the darktide comes in.